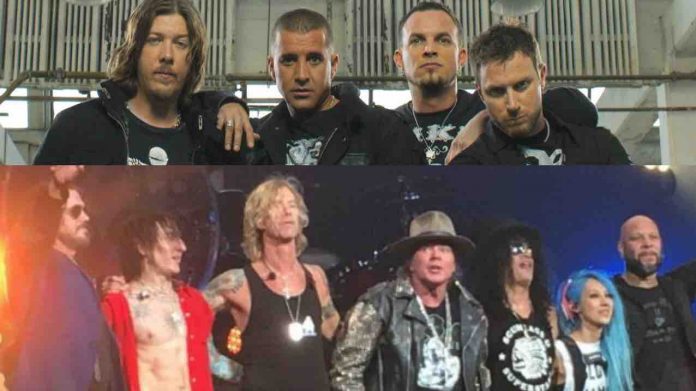 Correct me if I’m wrong, but that first Creed album [1997’s ‘My Own Prison’] is one of the only albums that’s ever been certified diamond, over 10 million [copies sold]?

“The [second Creed album, 1999’s] ‘Human Clay’ record did – I think one of the other records might, I don’t know, might have been, but Human Clay, in its heyday, went diamond.”

It’s crazy. How big is the plaque?

“It’s crystal, it’s about a foot tall. But back in the day, I had – somebody was cleaning our family room and knocked it over and shattered it.”

So what happened, did you get it replaced?

“I got another – they sent an extra one to our management office, thank god. I got the last one, but the girl that broke it was just heartbroken. She never came back. I tried to explain, ‘It’s just a piece of glass. Glass breaks.'”

I had to get some Creed on *plays Creed music*. We were talking about earlier, I can’t believe it’s been 22 years…

“It’s been a long long time, I feel like I was a kid when I was recording that song in the studio. I was a child.”

It’s kind of crazy that one of your albums, you know, that you can look at it next to an album you love so much, like ‘Appetite for Destruction,’ in the same kind of category.

“It’s humbling when you see that, that you’re in that regard.”

By the way, what’s going on with Alter Bridge?

“Alter Bridge, as soon as this [Tremonti] tour’s over, I’m hitting the studio. I’m writing demos, I have Eric who’s in my band now, brought his whole big studio in the back lounge. So I’m recording demos for that now.”

From the time when you recorded your first albums – after all this time, are there artists that you still haven’t toured with, haven’t met yet, who have you lost your mind at the idea of getting to meet them at this point?

“At this point, I’ve pretty much met all my heroes.”

“Um, Metallica. Still, if I were to meet these guys, I’d turn into a kid – I don’t know what to say. Megadeth, like guys from Megadeth – [bassist David] Ellefson’s such a good guy.”