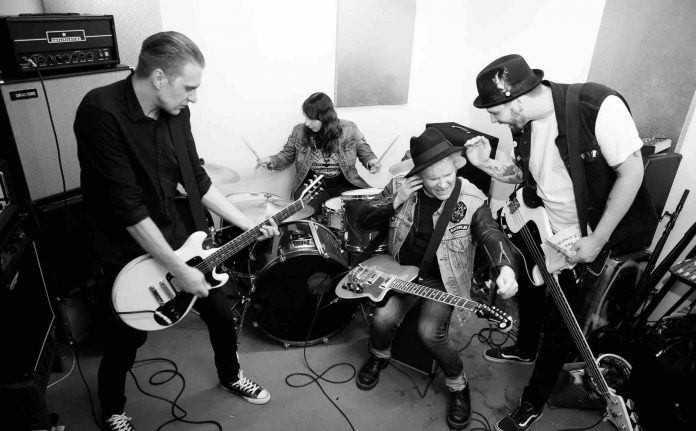 Any way you cut it, when the current musical landscape- and specifically alternative rock, we are in dire need of some guitar-driven chaos. Processed, computer noise be damned! Hailing from Helsinki, Finland, Daggerplay are taking the rock and roll flag and waving it loud- and proud. Their latest album, Subterranean Reality is unrelenting in it’s non-stop onslaught barrage of wild guitar riffing, chaotic rhythm section and fantastic, vocals. The kick in the ass rock music needs may be an understatement when staring down the impressive domination of Subterranean Reality.

Through fourteen songs, Daggerplay operate with a push-and-pull dynamic that opens up the floodgates of talent putting their master craftsmanship on full display. They’re dangerous in their over-taking of rock and roll; the way it should be. Album opener “Red Sky”, an instrumental track, kicks off the album allowing the four members of Daggerplay free range to show off their hefty musical chops. Similar to the Dead Kennedy’s “Police Truck” in spirit, “Red Sky” would be the standout track on a lesser album. But therein lies the beauty of Subterranean Reality; there is no let up!

The other bookend to Bandwagon Network Radio’s December 2018 Album of the Month, ‘Sinister Blues” pushes Daggerplay past their previously established comfort zone but man does it pay off. The old-timey, swing sound and break-neck tempo changes brings the album to a close on such a high-note and with such a thirst for more, it’s genius. And that guitar work! Very Nice!

The farther into Subterranean Reality you get, the more Daggerplay really hit their stride. One-trick ponies they are not. Elements of rockabilly, surf-rock, punk rock and straight up rock and roll bleed together forming this undeniably fresh sound. Even standout track “Black River” has the makings of a straight up metal song; a welcome surprise, no doubt. With no shortage of swift, slick guitar solos, anybody looking for some six-string inspiration can get more than their fare share of awesome guitar work all throughout Subterranean Reality.

Lead singer Pekko Mantzin offers up a solid vocal display; never looking to show off, rather perfectly serving the need of each song. Certain lines will force a double-take as his voice shares certain qualities with Ghost singer Tobias Forge; that’s high praise. Speaking of Ghost- the album’s standout track- and one of its two singles, “Ghosts” is a beautiful, melancholy rock song. The ringing verse guitars and infectious drums hit you right in the gut before the song’s killer chorus buries itself deep into your subconscious.

Subterranean Reality has something for everyone. Daggeryplay clearly can produce quality music at a high volume. Daggerplay is the kind of band we need to come and drive next into the next era. Rock and roll fans, do yourself a favor. Listen to Subterranean Reality by Daggerplay immediately! Fans of The Ramones, Green Day and Dead Kennedy’s will not be disappointed!