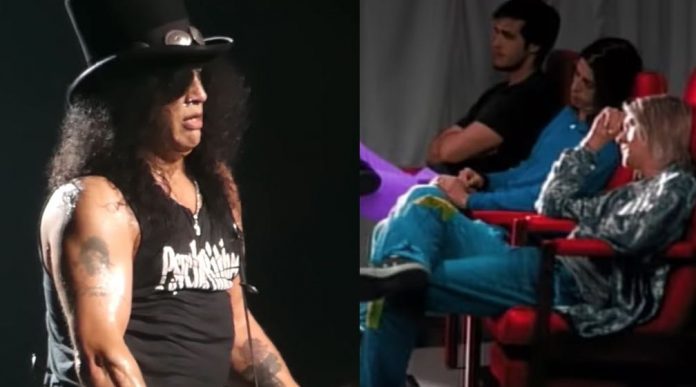 In a new Radio X interview, Dave Grohl told a funny story about Krist Novoselic urinating next to Guns N’ Roses guitarist Slash in a bathroom at the Rainbow during the Nirvana years. Alternative Nation transcribed his comments.

“I do remember going to the Rainbow once during the Nirvana years, and being in a bathroom that Krist Novoselic pissed next to Slash. I think he said, ‘That’s quite a splash, Slash.’ But it was more his experience than mine.”

He also said that Queens of the Stone Age frontman Josh Homme once urinated on him.

Watch the interview below.

Speaking to Radio X’s Gordon Smart backstage at Foo Fighters’ recent show at Manchester’s Etihad Stadium, Dave Grohl admitted that the moment he fell offstage at a show in Gothenburg, Sweden in June 2015 was the lowest point in his performing career… but that events quickly turned around.

Dave explained: “I though this is the worst gig of my life. And then we got up onstage and finished the show and it was the BEST show of our entire career!”

He went on: “We just played there again recently and I had a little post traumatic… y’know, looking at the stage and looking at where I fell off.”

Guns N Roses frontman Axl Rose borrowed Grohl’s impressive chair for an appearance at Coachella in 2016 and subsequent performances when he broke his foot at the Troubadour in April 2016.

Grohl explained: “When Axl borrowed it, his management asked how much do you charge for the throne? You can’t charge anybody for the throne, it’s bad karma! So I let him have it.”

“At the end of the tour, he gave me – as a thank you gift – the most incredible guitar, the best guitar I have ever had in my entire life.