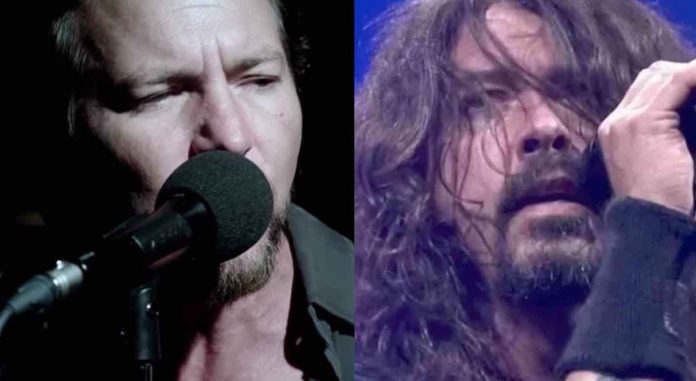 With such a track history as Dave Grohl, you know that he has had many times in the sun with so many incredible bands from the past and the present. In fact, before Dave Grohl was the face of the Foo Fighters, he was, of course, the drummer for Nirvana.

In the time of Nirvana, Dave and the boys were able to tour and play shows with tons of great bands of the 1990s. One band that seemed split among Nirvana was Pearl Jam. Kurt Cobain seemed to have an issue with Eddie Vedder while Eddie didn’t seem to have much issue with anyone and Eddie Vedder was crushed when Kurt Cobain passed away. Dave Grohl on the other hand really admired Pearl Jam’s work.

To this day, Dave Grohl seems to carry on his love for Pearl Jam and those who are in the band. Dave Grohl recently released a playlist of music that goes with his book – ‘The Storyteller: Tales Of Life And Music By Dave Grohl’.

The playlist that Dave Grohl dropped has close to 150 songs on it. The songs range from AC/DC to Queens Of The Stone Age to Pearl Jam’s song ‘Daughter’ and of course, peppered throughout the playlist are Nirvana and Foo Fighters tracks which hold very deep meaning to fans and Dave Grohl alike.

On the playlist as well are the Red Hot Chili Peppers which many know had a great relationship with Nirvana as they had many great times together as bands playing tours and festivals with one another.

Dave Grohl has always been a fan of music before anything else. Dave Grohl knows how important he is within music, but first and foremost, Dave Grohl is an admirer of all things music from all genres and walks of life which makes him so great as an artist.