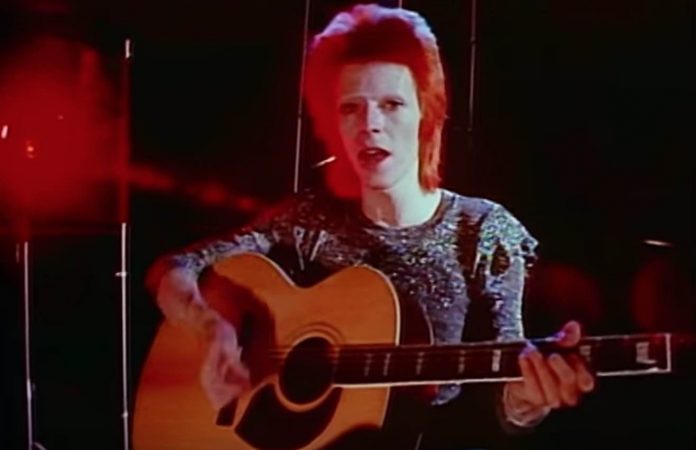 During a new interview with former MTV Headbangers Ball host Riki Rachtman for his podcast, The Cathouse Hollywood Podcast, Rachtman spoke to Joseph Brooks, who was the DJ for the infamous Hollywood nightclub. Here, Brooks discusses how David Bowie tried to play with Guns N’ Roses during the height of their career and the lowest of his. Alternative Nation transcribed Rachtman and Brooks’ comments below.

Rachtman: A few weeks ago, I hung out with Joseph and we talked for hours, he’s got so many good stories that will be on a future episode. However, we are remembering October 10th,1989. Joseph was in the DJ booth, which was pretty much off limits to anyone except for the closest of friends. Two of our security guards walked in.

Brooks: Julio and Sam came up and said

“There’s somebody outside, we don’t know where to put him. Can we put him in here?”

Brooks: I’m wondering who it is and they were like “we can’t let him be in the club and this is the only place we can put him.” So, I said:

Brooks: The security guards came, they were like my best friends, they weren’t weird security. They came up to me and they wanted to know if they could put this guy in here. They knew that they didn’t ask that casually because they knew I didn’t want people in there if I didn’t know them. They asked me to put David Bowie in there, who is my ultimate hero.

Brooks: I was speechless, I didn’t know what to do. I wish it didn’t happen now because he was a drunk mess and he was not the David Bowie I wanted him to be. Who I had spent my whole life thinking about, it wasn’t that moment at all. It was a big disappointment because he was an ordinary drunk. It’s sad, I know, it’s terrible, terrible. Bowie came into the booth, they put him in there and he was abusive to the waitress, he kept demanding more drinks, he was rude to her and he was a loud, obnoxious drunk who was hitting on girls.

Brooks: Guns N’ Roses were playing and was like

“I wanna get up there with them!”

Brooks: I didn’t think it was a good idea, He said “well how can you tell me that?” or something to that effect and I told him that I’m personal friends with these people, that singer up there (Axl Rose), this is his moment and he is not going to want you to get up on that stage. Bowie says that he is gonna go walk up there and I advise against it. So the security guards came and they took him away, they took him out. I think he left.