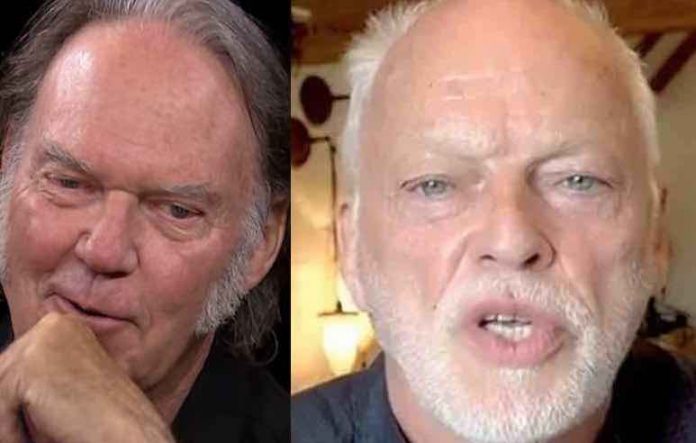 A Neil Young fan admitted to disrespecting Pink Floyd icon David Gilmour at a restaurant and demanding to know if he was going to see Neil in a recent NeilYoungArchives.com fan Q&A. David Gilmour ‘canceling’ a huge Pink Floyd show was recently revealed.

The fan wrote, “I took my son Ben with me to see you perform Greendale at the Hammersmith Apollo – an extraordinary occasion. By this time I had become a judge and I wondered how many other judges you can count as fans of Neil Young and Crazy Horse. We were mesmerized by the whole evening, your narration before and after each song from Greendale, followed by songs seemingly selected at random as you flipped through a lever arch file filled with the lyrics to your songs and which were played, or so it seemed, just for us, even though David Gilmour of Pink Floyd was a few rows in the seats ahead of us.

So struck was I by the concert that I wrote to you care of your record company thanking you for the evening and the pleasure you had given to us. I did not receive a response, but then why would I?

Ben was a real convert to your music; trying to learn some of the basic chords to some of your songs, listening to your music constantly to the increasing irritation of his girlfriend Kate.

So when the opportunity came round again I took Ben and Kate to see you at the Hammersmith Apollo again, this time when you performed with your Electric Band – with the now sadly missing Rick Rosas, Ben Keith and Pegi (?). In the restaurant beforehand I profoundly embarrassed my son and daughter in law when I approached David Gilmour who was also there (was he stalking me I wonder) and asked him if he was going to your concert later that day. He finished his coffee and promptly left – another rock star’s lunch spoiled by an over enthusiastic fan.

The concert – just you, solo, followed by the Electric Band was phenomenal. I am still waiting to see it as captured by Jonathan Demme. And Kate became a convert too. Whilst previously she would complain when Ben or I played your music she now loved to listen to it – and their first dance at their wedding was to ‘Harvest Moon.’

I am now in the final years of my journey in this life. Your music has been a constant thread providing me with both exhilaration and comfort, but also disturbing me from time to time and unsettling me. That is what a true artist does. No one will like all of Shakespeare’s plays equally; they are not all as good as each other. Not everything Picasso painted is appreciated by everyone. An artist cannot control their muse; sometimes it is there; sometimes it is not.

But from this aging judge in England – thank you for everything that you have given to me. And by way of a question will there be another (a final) NY and Crazy Horse album?”

Neil responded, “Judge, Thanks for your letter, which I read and appreciated greatly. I am doing what I do and letting the chips fall. everyone, in their lives, has ups ands downs.

The film you saw being made at Odeon Hammersmith is a Tim Pope film, ‘LONDON’, still unreleased, a beautiful gem which we will be showing. I hope you are enjoying NYA. It was made for people like us. Say hello to Ben. I have a son Ben as well! ny NYA.” Neil Young recently unloaded on booing fans.