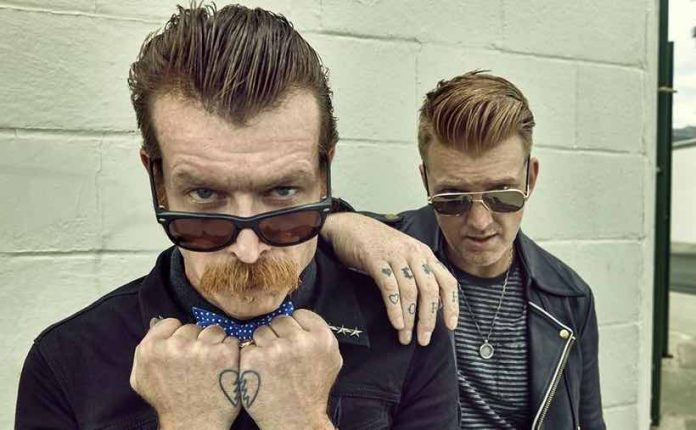 In sombering news regarding the popular garage rock group, Eagles of Death Metal – Tuesday Cross – the fiancee of the group’s co-founder, Jesse Hughes is currently comatose at Glendale Memorial Hospital outside of Los Angeles, California. Cross has been a frequent bass and keyboard player for the group as well.

In addition, the 49-year-old Hughes is currently alleging that he has been prevented from seeing Cross. This has caused a legal dispute over her care.

Cross, 31 years old, whose real name is Marina Cardenas has been comatose for around six weeks after she suffered an asthma attack which sent the group member and significant other of Hughes into cardiac arrest. An EEG test indicates that Cross suffered damage to the brain and that the hospital in question has allegedly not been giving her the quality of care & proper treatment for it.

When Cross was hospitalized earlier this year, a text message was sent from Cross’ estranged mother Maria Gaytan. That text stated: “Okay just called [the hospital] to let them know that you will be making decisions since she has been living with you for the last 13 years and practically married and that you will speak to me before consenting anything.” In another, she said, “I am going to follow anything you say, I trust you.”

However, as Billboard is reporting Gaytan changed her mind. This was because a doctor at the ICU for that hospital would recommend that “Cross be extubated [and] given a tracheostomy, a surgical procedure that enables a person’s trachea to receive direct access to a breathing tube, and that Cross be fitted with a G tube, a surgically planted device that gives direct access to a patient’s stomach for feeding,” The current legal battle is between Hughes and Gaytan on who has power of attorney in regards to Cross.

Hughes would tell Billboard the following quote in regards to the situation at hand: “The love of my life is going to die. I believe the hospital wants to end her life. She deserves to live. … What if she never wakes up? What if I can’t ever talk to her again? The hospital made up their minds long ago that they didn’t want to treat her.”
For their part, when Billboard sought out comment from the hospital itself, a representative said: We cannot disclose any information regarding any patient due to HIPAA regulations and California privacy laws.”

There is currently a GoFundMe that has been launched for Cross – you can view that by clicking here.