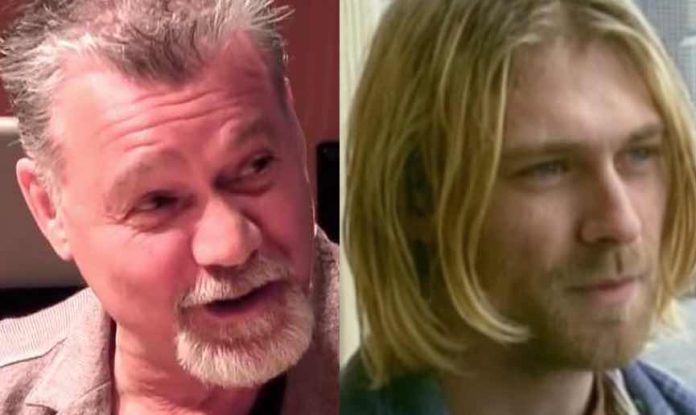 We did this show with Nirvana at the Warfield, in San Francisco. They plugged in, and from the first chord, Kurt flew into the audience. He was surfing over the crowd while playing the song. The crowd threw him back onto the stage, and [snaps his fingers] he hit the first line of the vocal. I was like, “Fuck it, there is no way we can beat that.”

The last time I saw Kurt, it was in Los Angeles and San Diego; I went to both shows there on Nirvana’s last tour. He seemed very content. He was having fun playing the gig, especially in L.A., because Eddie Van Halen was there. It was funny. Kurt was walking down the hall, and I said, “Dude, Eddie Van Halen’s in your dressing room holding court.” And Kurt goes, “No way!” He was real excited. Kurt went into the dressing room, walked right up to Eddie and kissed him on the mouth. He had to do that.

Despite the unapproved kiss, supposedly things went fine, and Eddie wasn’t pissed off or anything it seems!

Van Halen icon, Sammy Hagar was interviewed on a new edition of Lance Armstrong’s show, The Forward Podcast. Here, the A-list Olympian shares the impact that Nirvana and Kurt Cobain had on him where as the former Van Halen frontman discusses how bands like Van Halen, Heart and Poison had to adapt in the rising era of grunge.  Alternative Nation transcribed Hagar and Armstrong’s comments.

Armstrong: I always ask people and I always think about this because I’ll never forget where I was the first time I heard Nirvana with Smells Like Teen Spirit. I was like: “Holy fuck, that’s different, I still get chills.”

Armstrong: I was in San Francisco and it was on FM radio, way before Satellite radio and it was on the radio! I was just like: “what just happened?!”

Hagar: What’s so crazy though is it wasn’t that different but it didn’t have the party. It took the hard edge music – Van Halen, Poison, all those were hard edge. There was party in there, it was pretentious and it had a little sense of humor to it. Nirvana took all of that out and it just became dark – a little bit darker rock and roll. These guys mean all this shit, you know? I mean, there is something deeper than just sitting and talking about girls and stuff. It affected me the same way too and it freaked me out. I think that’s probably what you saw me say. It freaked all of us out, like Nancy Wilson. I interviewed her and Jerry Cantrell at the same time on my first season of Rock and Roll Road Trip.

Hagar: She was from my generation but she grew up in the same town as them, that grunge came out of. So Heart probably was really gone because they were really fucking hair band-y. Those girls, man, they took it to the next level. I wondered how she felt about it so I interviewed them together and Jerry’s a dear friend. Yeah, Nancy Wilson said the same thing that I did: “I was scared to death of those guys, man! I’d get invited to a party and I’d think *gasp* I’m not gonna go! Those guys are weird!”