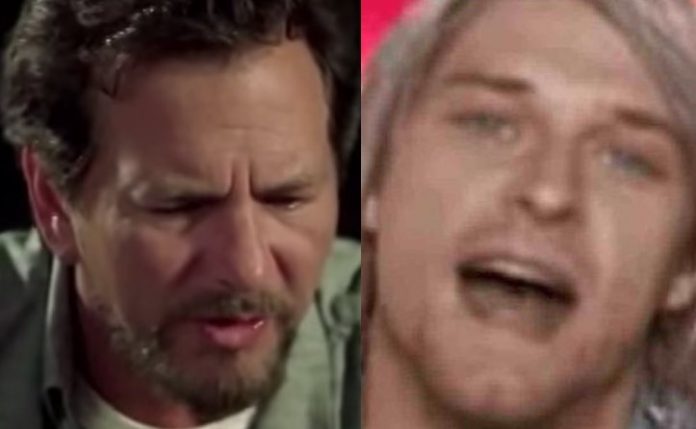 Pearl Jam frontman Eddie Vedder made a hilarious comparison when discussing how the media manufactured a false feud between himself and Kurt Cobain in the 90’s.

PearlJamOnline.it recapped Vedder’s comments on Chrissie Sam & Browny’s radio show, “Vedder described also the incredible emotion he feels whenever he sings Black and he talked about one of the best concerts of his youth (Tracy Chapman live at Bacchanal of San Diego, on 24th September 1988).

Not only that…the Pearl Jam singer remembered the ‘feud’ with Nirvana, completely trumped-up by the media, pointing out its nonsense, ‘as the rivarly between Britney Spears and Christina Aguilera,’ he added and smiled.”

Vedder and Cobain’s ‘feud’ was very hyped by the media in the 90’s, though the criticism was largely one sided, with Cobain calling Pearl Jam a ‘corporate’ rock band, while Vedder and Pearl Jam weren’t ever critical of Cobain and Nirvana, with Dave Grohl and Krist Novoselic even attending Pearl Jam shows.

Near the end of his life, Cobain revealed that he actually personally liked Eddie Vedder from conversations with him. Courtney Love even set up Cobain and Vedder to dance at the 1992 MTV VMA’s, which was shown on video in Cameron Crowe’s 2011 PJ20 film in an emotional scene.