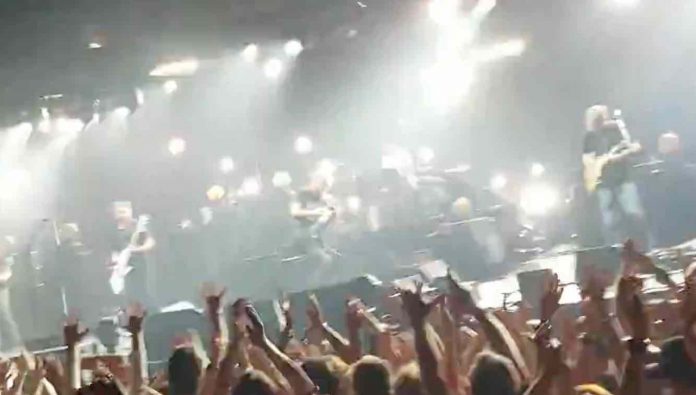 Eddie Vedder swiftly kicked down his mic stand near the end of “Rearviewmirror” at Pearl Jam’s show in Prague on Monday. You can watch video of the epic kick below!

Below is the setlist and recap via Sea and John on the PearlJam.com forums:

Setlist:
01. Pendulum
02. Nothingman
03. Corduroy
04. Brain Of J.
05. Do The Evolution
06. Tremor Christ
(Ed laughs and says “okayyyyy….” He then addresses the audience in Czech, more or less much to their pleasure and amusement. He talks about last playing there six years ago and introduces the band)
07. Lightning Bolt
(Sometimes when this is happening. Let’s say, not in the United States but when you have a really horrible leader it makes you remember when you had a great one. I would like to send this song out to the memory and honor of one of the great humans, great figures of the 20th century and he was a great fan of the Velvet Underground. Mr. Václav Havel)
08. Dissident (escape is never the safest plan but we’ll accept you anyway)
09. Even Flow
10. Jeremy
11. Love Boat Captain [improv intro- No I won’t be quiet. No I won’t mind my manners and your devices and your evil plans. I will use my voice and everything I’ve got. We all deserve to ????]
12. Help-(Lennon, McCartney) [Only has Eddie vocals and guitar. Plays first verse and chorus. 1:15 sec]
13. Help Help
14. State Of Love And Trust
15. Spin The Black Circle
16. Better Man / I’m Waiting For The Man-(Reed) 17 second tag / Save It For Later-(Charley, Cox, Morton, Steele, Wakeling)-1 minute tag)
17. Porch

Encore Break 1
(Wow, this is incredible energy you are giving us tonight. Thank you so much. Ed goes on to thank all the travelers by spotting the flags. Things like, “Denmark, Mexico, First Aid…Just kidding.” Some Czech. He wants to mention Rob. Ed talks about a time in Prague where the trucks were late because of the snow and the usual 9 hour set up got completed in about two and half hours. It was a coming together and Rob had been there for that show and the ones before and after. He says there are a lot of great requests. He makes a joke about only knowing the “or” of All Or None but his family met some very nice locals they they requested this song)

18. Man Of The Hour
19. The End (Eddie only vocals and acoustic guitar)
20. Given To Fly (“made it to the clock / had a smoke..) (Ed climbs on the baffles behind his amp and the drum riser to sing to the back)
21. Unthought Known
22. Black
23. Rearviewmirror (Ed and Jeff rock it out as crouched over as they can get. Ed kicks over vocal mic at end)

Encore Break 2
24. Elderly Woman Behind The Counter In A Small Town (played to those behind the stage)
25. Alive
26. Rockin’ In The Free World-(Young)
27. Indifference (Ed puts on a Luchador mask that got thrown onstage. He takes it off to sing.)
(Introduces the band after the song. Thanks the audience for their energy and thanks the crew)