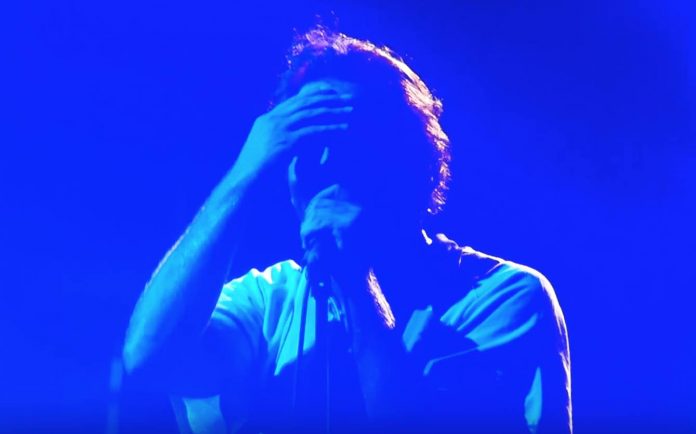 Eddie Vedder went after a group of fans for crowd surfing and moshing at a show, as seen in a recap posted by Sea on the PearlJam.com forums.

01. Why Go
02. Hail Hail
03. Deep
04. Untitled
05. MFC
06. Elderly Woman Behind The Counter In A Small Town
07. Low Light
08. Do The Evolution
09. Retrograde
10. Dance Of The Clairvoyants
11. Even Flow (mosh pits and crowd surfing. Ed admonishes them to be careful. Mike runs around down in the barricade section)
12. Superblood Wolfmoon
(Some talk about people seeing 50 shows and couples with lasting relationships, members of the audience and the members of the band.)
13. Amongst The Waves
14. Corduroy
15. Not For You/Modern Girl-(Sleater Kinney)-1:26 music and lyrics
16. Nothing Man (During the song Ed admonishes a person who is still crowd surfing. He points out that it has been going on all night and this isn’t really the song for it and that there are women and young children in the front and people are getting beat up.)
17. I Believe In Miracles-(Ramone, Ray) (Talks about the owner of the Ramones museum)

{Ed talks about how it looked like shows might not ever happen again and how in the US egomaniacal politicians were trying to divide our country. He mentions a man named Roland who bought tickets for the show when they were first available, before the delay from the virus. Roland ended up facing some challenges but Ed wanted him to see how beautiful the venue is from the stage and invites Roland down. Roland is in a wheel chair but he and his family make it down the steep ramp and get to stage. Take photos with the guys and then enjoy…}
18. Porch

19. Footsteps
20. Street Fighting Man-(Jagger/Richards)
21. Yellow Ledbetter (Only played about half then switched to..)
22. Alive