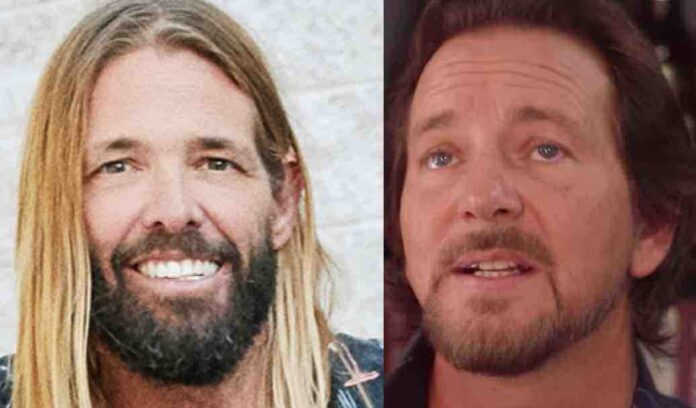 Eddie Vedder had Pearl Jam play “Porch” at their second Hyde Park show in London, telling Taylor Hawkins’ widow Alison and their children the song was for them.

Setlist via Sea on PearlJam.com forum:
01. Corduroy
02. Elderly Woman Behind The Counter In A Small Town
03. Why Go
04. Deep
(Starts to congratulate the audience and check in. Sees a person in distress and stops while that situation is sorted. Encouraging the crowd to make room for the EMT. Once things are clear he thanks the audience)
05. Wishlist/Waiting On A Friend-(Jagger, Richards ):40 seconds music and lyrics (improvs lyrics about being alone in his past but now he has friends. Goes into Stones cover)
06. Garden
(While introducing Johnny Marr Ed sings “We love you Johnny, Oh yes we do” to the tune of “We love you Conrad”-(Strouse, Adams:Bye Bye Birdie :20 seconds a cappella )
07. Throw Your Hatred Down-(Young) w/ Johnny Marr on guitar
08. Do The Evolution
09. Animal
10. Dance Of The Clairvoyants
11. Not For You
12. Rats (with “Ben” tag-(Black, Scharf) 30 seconds music and lyrics)
(While observing flags in the audience he sees a Union Jack with “faithful to you” written on it)
13. Faithful
14. State Of Love And Trust
15. Eruption-(Van Halen)
16. Black
(Talks about Boom’s first trip to England. He praises the other bands that played and notes the upcoming tribute concert for Taylor Hawkins and dedicates the next song to his wife, Alison and their children)
17. Porch

From a plague in the 1600’s to our modern plague. Hoping the rest of the world stands up and supports Ukraine.