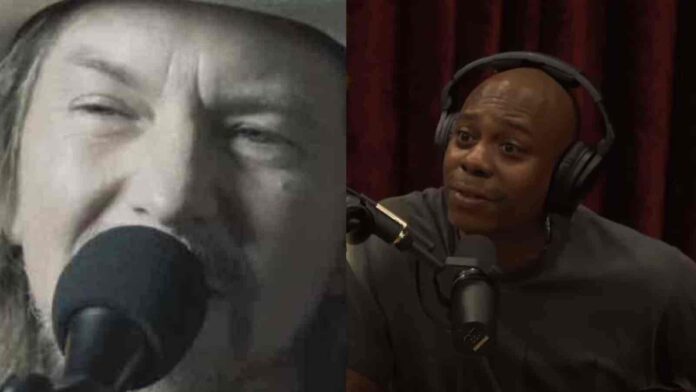 Eddie Vedder discussed Dave Chappelle being attacked onstage at the Hollywood Bowl at Pearl Jam’s LA Forum show on Saturday. He said that he wasn’t onstage to tell jokes, so he hopes nobody would hit him. He later talked about Bill Burr playing at the Forum, and again referenced not wanting to be attacked, saying it appeared whites were safer from an onstage attack. Below is the setlist from the show via Sea on the PearlJam.com forums.

Setlist:
01. Of The Girl
02. Elderly Woman Behind The Counter In A Small Town
03. Superblood Wolfmoon
04. Corduroy
{Ed talking about the great things that have occurred in this building. He also talks about missing Pink Floyd playing The Wall because his friend forgot the tickets}
05. Dance Of The Clairvoyants
06. Quick Escape
{Met young man named Dennis while visiting colleges. Dedicates song to Dennis and JP}
07. Faithfull
08. Not For You-(Modern Girl-(Sleater Kinney) 1:00 minute tag {“if the guy you are with isn’t pro-choice then he shouldn’t be allowed to fuck you”}
09. Buckle Up
{Shout out for Dave Krusen who is possibly at the show. “Dave you are part of the family”}
10. Even Flow
11. Never Destination
12. Down
13. Nothing Man
14. Present Tense {Ed checks in with security while Mike continues to play}
15. Who Ever Said-(quotes line “I can’t get no satisfaction” 12 seconds long. Also shouts Devo because he sings it more like the Devo version)-Jagger/Richards
16. Porch

17. State Of Love And Trust
18. Wishlist (to the back of the venue)
19. Do The Evolution
20. Black
{Ed talks about a fan who had a brain tumor … after surgery and radiation he wasn’t able to communicate very well but he vowed to his brother that no matter what we are going to the Pearl Jam show on May 6}
21. Alive
22. Yellow Ledbetter

Please share your experiences of the show here…the Fanview threads are preserved on the board.
Please keep the Fanview threads for Fanviews. It’s ok to begin another thread on discussions of other topics and/or debates. Thank you!
Thank you, John for the set list & notes.