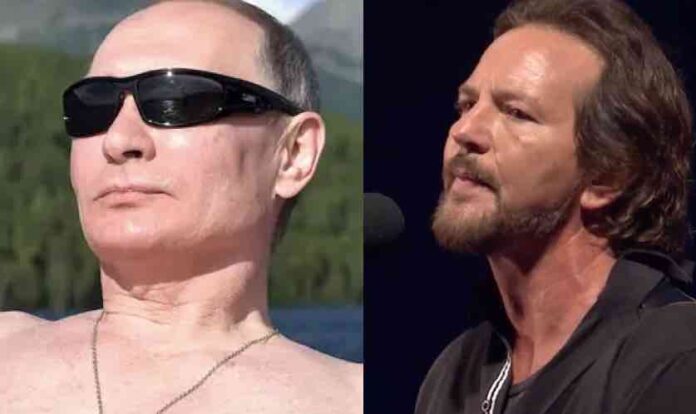 Pearl Jam played at Tauron Arena in Krakow, PL on Thursday, and Eddie Vedder went on a vicious rant against Vladimir Putin and misinformation from the Russian government.

Setlist and recap via Sea on the PearlJam.com forums:
01. Sometimes
02. Porch
(We won’t play a place that is more important on the world stage than tonight. Briefly mentions the tragedy in Ukraine and says something, presumably obscene, in Polish directed at Putin.)
03. Do The Evolution
04. Quick Escape
05. Dissident
06. Buckle Up
(A person in crowd gets medical attention. Ed suggests some medicinal wine but doctors do not prescribe)
07. Even Flow
08. Seven O’Clock
09. Immortality
(Groups doing incredible work we want to mention. Sean Penn’s group is called CORE. Volunteers from Krakow and Ukraine are here tonight)
10. Corduroy
11. Jeremy
(Ed feels that a microphone commutes a lot of responsibility onto people who use them. He suggests legal ramifications for people who tell lies. The internet is like a microphone and needs to be used responsibly. He encourages people to tell the truth and to stop wars)
12. Unthought Known
13. Once
14. Who Ever Said { (I Can’t Get No) Satisfaction-(Jagger, Richards) sung in style of Devo. just a line 20 seconds or less)
(This is request. If you don’t like it, it ain’t our fault)
15. Hard To Imagine
16. Rearviewmirror

Encore Break
Not being able to play has made the band appreciate playing shows in places like this.
Guests here tonight are from the Ukrainian consulate and other people (mostly woman) who are helping people come into Poland from Ukraine and get fed.
Olga Lany – Fundacja Kocham Debniki (I love Debniki Foundation)
Agnieszka Korsak – Fundacja Let’s Help Together
Kasia Pilitowska – Zupa dla Ukrainy (Soup for Ukraine Foundation)

17. Better Man/Save It For Later-(Charley, Cox, Morton, Steele, Wakeling) (2:30)
18. Elderly Woman Behind The Counter In A Small Town {played to crowd behind stage. Ed thanks security for being mellow as people get excited and maneuver to see and be seen)
19. Smile
(This is a song about borders, maybe wishing there wasn’t borders. Help me out and take some nice pictures of people with their phones up. Put it on the internet and get some truth out)
20. River Cross
21. Alive (Ed waves a Ukraine flag)
22. Rocking In The Free World-(Young)