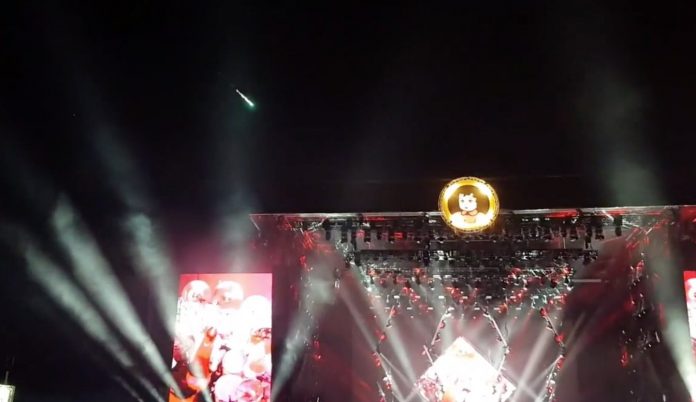 In the middle of an incredible recent Foo Fighters concert, a meteor fell in the sky behind the stage during a Taylor Hawkins drum solo. Is this is a sign that Taylor Hawkins is the new God of rock? Time will tell! Watch video below.

Redditors left some great comments including: “THE NEW GOD OF ROCK HAS BEEN CHOSEN!”

“These fans should feel lucky this wasn’t a Dethklock show.”

“They really do. They had a concert in New Zealand a few months ago and during their performance there was a double rainbow.”

“WTF…. I worked on the stage for a Foo Fighters show in Auckland in 2011. It registered seismic activity almost 2kms in each direction.”

“I saw them in Lollapalooza 2011. It was a torrential downpour until Dave Grohl sang “rain rain go away, come again some other day” and then it stopped. I now fully believe they have the power of God and anime on their side.”

“I’ve never felt the need to chase something else,” he says of their classic red-blooded rock sound.

“And we get cursed for it: ‘Oh God, it’s another Foo Fighters record.’ Well, yeah! I don’t wanna make a reggae record.”

Asked about how the band has continued to survive, Grohl is clear. “We are like brothers,” he says of the Foos today. “It sounds trite but it’s true. Imagine being on a family trip for 20 years. That’s what it’s like being in the Foo Fighters.” Grohl is unquestionably the band leader and his rules apply – shared dressing rooms and transport, no inadvertent egos. What’s the key to keeping happy campers?

“Well,” he says. “You just have to steer the ship. As time passes it goes from being a dingy to a yacht.” Ever the cheeseball, he concludes that the music is what keeps Foos alive, man.

“There’s a quote, ‘The fish always starts thinking from the head.’ Well, if you’re the face on the cover of British Airways’ High Life magazine, you’d better be writing good songs for everybody.”