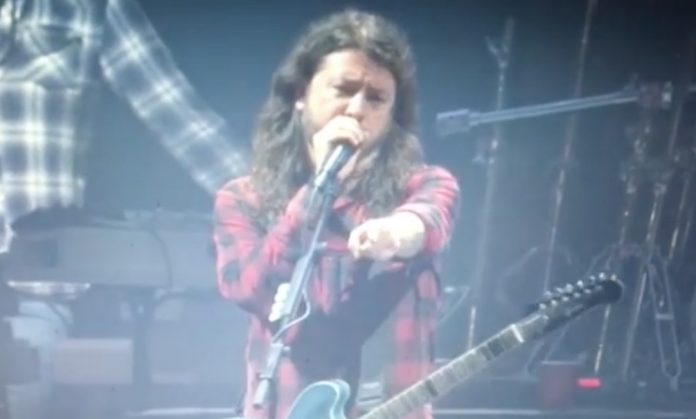 “That was so classic,” he said with a laugh since Gallagher couldn’t remember the classic song’s lyrics and just ran with it. “You know, of all the people who should have that (stuff) memorized. Really? It should be him. The funniest part of the whole thing was, and I don’t know how well Joe Perry knew or if he had ever met Liam before then, but the look on Joe’s face when all of that was going down, it was so funny. That, for me, to get to play on stage with Joe Perry, on a personal level that was a dream because Aerosmith was one of my favorite bands growing up. I got to have a little fan moment and I took advantage of it.”

Reverb have also announced the following:

After having unleashed his unprecedented and immersive project “PLAY,” Dave Grohl today announced The Dave Grohl “PLAY” Reverb Auction in partnership with Reverb.com, the leading online marketplace dedicated to buying and selling musical instruments. The auction launches on Tuesday, October 9, and will feature guitars, drums, and more signed by the musician. Proceeds from the auction will go to organizations that help young generations of musicians “just PLAY.”

In August, Grohl released “PLAY,” a two-part mini-documentary that celebrates the rewards and challenges of dedicating one’s life to mastering a musical instrument and culminates in a 23-minute, one-man-band instrumental song performed live by Grohl on seven different instruments. In conjunction with the project, recording studios around the country donated session time to young musicians. In support of musicians like these, Grohl is auctioning a collection of signed instruments that mirror the musical equipment used to create “PLAY.”

“When I take my kids to their music lessons, I see these rooms full of children that are really pushing themselves to figure this out. I’m inspired by watching that process,” Grohl said. “Even now, as a 49-year-old man, I’m still trying to figure it out. It’s not something that you ever truly master. You’re always chasing the next challenge, and you’re always trying to find a way to improve what you’ve learned.”

Beginning on Tuesday, October 9, fans can bid on music gear donated by DW Drums, Fender, Gibson Gretsch, Ludwig, Made By Maple, and Zildjian — all signed by Grohl. Proceeds from the auction will benefit several organizations that make it possible for young musicians to learn and grow.

“Seeing my own kids start to play music and take lessons brings me back to the time when I was their age, chipping away at it and learning from my mistakes,” Grohl said. “ It’s a lifelong obsession, but at the end of the day—just like any kid—the reward is just to play.”

The auction will begin on Tuesday, October 9, and end in the evening on Sunday, October 21. Note that Reverb only hosts auctions on the rare occasion that the team deems items truly one-of-a-kind. To preview the items that will be available in The Dave Grohl “PLAY” Reverb Auction and a video of Grohl talking about the initiative, visit http://Reverb.com/DaveGrohlPLA Y.

And at long last, the limited edition vinyl release for “PLAY” is available now. The LP features a 180 gram, single-sided vinyl with Grohl’s studio floor plan that was used for the recording of “PLAY” etched on the B-side.  The intricate packaging is a reverse gatefold that opens up diagonally and includes an insert of the mic input list from the recording session. Available for purchase now at your local record store or https://shop.foofighters.com/c ollections/dave-grohl-play.

Very special thanks to the manufacturers and studios who graciously donated gear and session time.