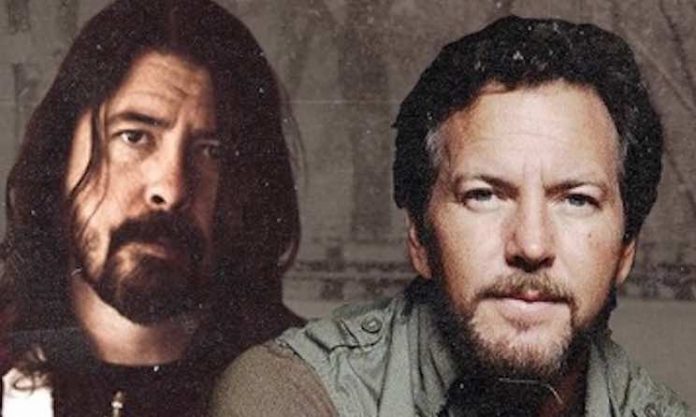 During a recent edition of the ever-popular Howard Stern Show, the King of All Media would ask the Foo Fighters if there was some tension between their group and another legendary and iconic 90’s grunge outfit – Pearl Jam. When asked if the Foo Fighters hate the band, Dave Grohl would state ‘not at all.’ Stern would then ask why the group then does Pearl Jam’s signature high-five in their film Studio 666, which Grohl tried to play down by saying the group barely ‘high-fives’ and it was merely a reference to their album cover for ‘Ten’.

Still, Stern would try to continue to press the issue by asking what he thinks Vedder would think about all of this himself. Foo Fighters member Taylor Hawkins tries to defuse the situation by telling Stern that because Vedder knows the group and that they love him, the group believes he would laugh about the situation at hand.

In other news concerning the frontman of Pearl Jam, Vedder proclaimed how his latest solo album was anything but. During a recent interview with the Associated Press, Vedder would state how ‘Earthling’ which came out last month is, in his opinion, more of a ‘group project’ than anything else. The album featured collaborations with some of the biggest names of music including Ringo Star, Elton John, and Stevie Wonder.

“It’s my picture on the cover of the record but there should be so many people on it. People just kept elevating the sounds by contributing.”