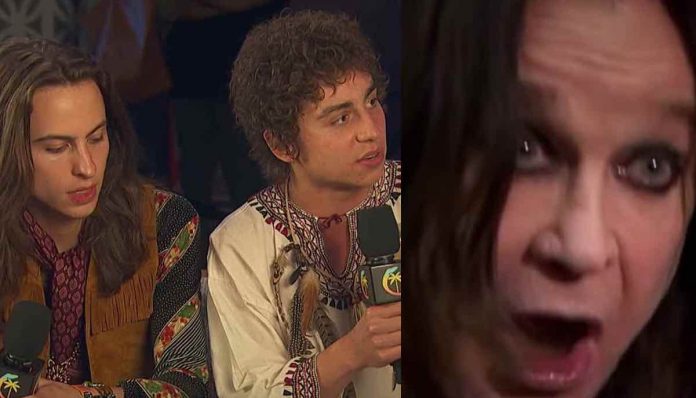 Greta Van Fleet have run the gamut when it comes to being insulted and praised by the media, but NME had a very weird line in a recent concert review, claiming Greta Van Fleet were ‘using mystic voodoo powers’ to revive the sound of Ozzy Osbourne and Black Sabbath, along with some other big names.

NME wrote, “Guitarist Jake Kiszka wastes no time in proving himself a florid finger ninja, and his singing brother Josh prowls the stage in a navel-flashing future rock shirt, sprayed-on white trousers and eagle feather hair adornments, throwing flowers into the crowd and wailing helium vocals through the roaring bluster of ‘Cold Wind’ and ‘Safari Song’ like a munchkin Robert Plant.

They’ve clearly studied the set texts of classic ‘70s rock – ‘Back In Black’, ‘Led Zeppelin IV’, ‘Paranoid’ – but they’re not hemmed in by their rules. ‘Black Smoke Rising’ and ‘Flower Power’ particularly rejuvenate the genre with stirring choruses, infectious hooks and hearty chipmunk bellows, the latter coming across like a cock rock War On Drugs. Their cover of Labi Siffre’s ‘Watch Me’ is more levitating country rock, verging on – gulp – Genesis. They might indulge at quite some length in the time-worn tradition of the monster rock-out, but they sure ain’t no Darkness.

Indulgent, though? You could say that. ‘We’re going to travel into savage territory and Jake will be our Sherpa,’ Josh tells the crowd at the set’s mid-point, ‘feel free to melt right into it.’ And with a flurry of ‘House Of The Rising Sun’ arpeggios, the band set off on a forty-minute trek into the doomy blues rock undergrowth, tracking the trails of Pink Floyd, Black Sabbath and Led Zeppelin using some kind of mystic voodoo powers. There are prog rock freak outs akin to falling into lava pits, plenty of rolling tribal blues thunder overhead and bits that feel like trudging through swampland.”

Barbee said they were not “remotely ready” for Saturday Night Live, and that the performance ultimately hurt the group, and that they should have waited another year.

“For whatever reason, Rolling Stone gave them a bad review at the end of the year. They did that article ‘Why Rock music sucked in 2018,’ and they mentioned Greta. I don’t know what’s been going on behind the scenes since the album dropped, but I still give a shit. That’s the band I discovered and gave them to the right people, but it’s concerning. You see it. I don’t know. I wish I knew. You can point your finger at different things. This didn’t help, that didn’t help.