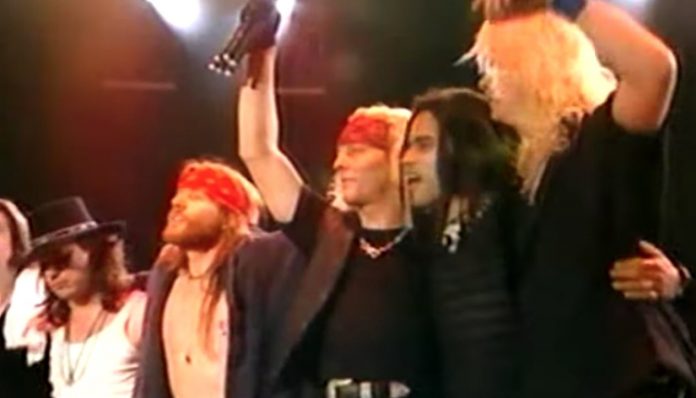 Matt Sorum recently talked about the breakup of Velvet Revolver, the band he formed in 2002 with fellow ex-Guns N’ Roses members Duff McKagan and Slash.

Matt Sorum opens up on the split

Sorum, McKagan, Slash and guitarist Dave Kushner held an exhaustive singer search after Velvet Revolver’s formation that lasted for almost a couple of years, during which they issued an open invitation to the public to send in demos. Eventually they settled on former Stone Temple Pilots singer Scott Weiland.

Velvet Revolver released two full-length albums through RCA/Sony BMG — 2004’s “Contraband” and 2007’s “Libertad” — before dismissing Weiland in April 2008. Sorum discussed the formation of Velvet Revolver and the band’s eventual split during an appearance on the latest episode of the “Sound, Sobriety And Success With Matt Pinfield” podcast.

“People give you drugs, man,” Sorum added. “C’mon, forget it; you can get drugs. But if I had to do it all over again, I would be, like, “Cmon, you guys, man. We’re not gonna get this opportunity again. This is it for us.’ And we just — we imploded.

“The second record, I like the second record — I think it’s a good record — but it didn’t have the angst of the first record. The first record had a youthful thing because we were hungry. We meant it. I think we meant it on the second record musically, but it didn’t have that fairy dust of angst. And typically you hear that on a lot of bands’ early records, even though we were [all experienced]. Typically the first couple of records are always the best records. Aerosmith ‘Toys In The Attic’, ‘Rocks’.”

Velvet Revolver reunited with Weiland for a four-song set in January 2012 at a Los Angeles tribute concert for late songwriter John O’Brien, but the band has otherwise remained inactive.