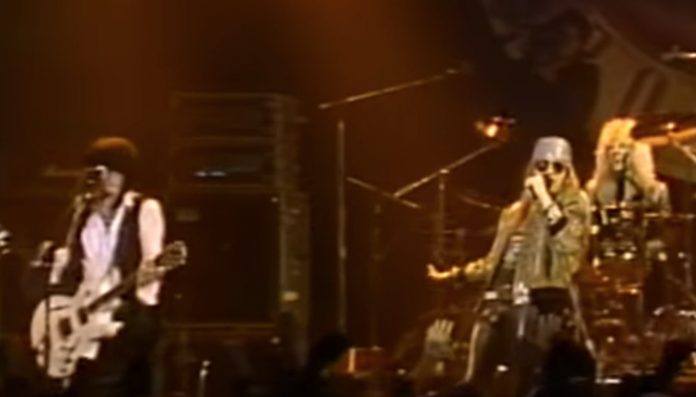 Original Guns N’ Roses drummer Steven Adler was recently interviewed on Hot Breakfast, and he revealed that Guns N’ Roses manager Fernando Lebeis is the only man who can make an original lineup reunion with himself and Izzy Stradlin happen. Adler revealed the news when asked about reunion rumors, and Alternative Nation transcribed his response.

“There’s no rumors. All I can do is say hello to Fernando. Hi Fernando, how are you? That’s Axl [Rose]’s manager. I’ve got to be impeccable with my words, that means without sin. I love you Fernando, I know you’re going to do the right thing.”

He added, “That’s the one guy that can make this happen. Everybody go on Fernando, Axl’s manager’s website, and bug the crap out of him until he finally gets it and puts the band back together. That’s FernandoAxlsManager.com. Fernando is loving me right now, I’m going to get a text tomorrow: ‘What the hell is wrong with you?'”

“I love you Fernando, and congratulations on the baby.”

Steven Adler reunited with Guns N’ Roses for guest spots in 2016, but he became frustrated when the band would not expand his role beyond being one or two songs at shows every once in awhile. Izzy Stradlin never joined the reunion as he claimed his old bandmates didn’t want to split the ‘loot’ equally.