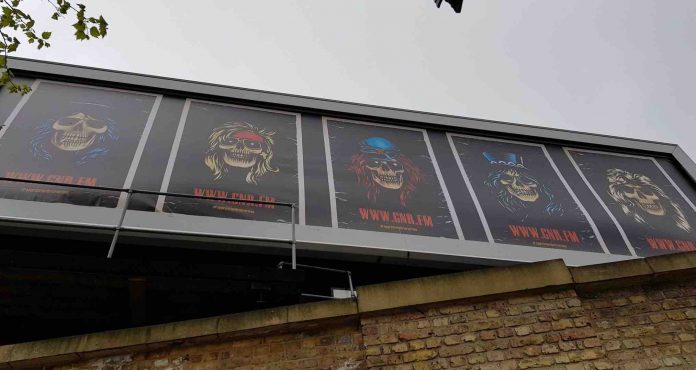 Alternative Nation reported yesterday that a mysterious billboard has appeared in London featuring all five original members of Guns N’ Roses, including Steven Adler and Izzy Stradlin, who were snubbed from the reunion lineup. It linked to a website called GNR.FM, which has a graphic that says: ‘DESTRUCTION IS COMING.’ The domain was registered on March 21st and updated on April 24th.

A new photo of the billboard can be seen above via KeyserSoze on MyGNRForum.com. It is unknown if Adler or Stradlin will perform with the band as part of the rumored Appetite for Destruction reissue. Steven Adler mentioned in interviews last year that GNR management mentioned planning something cool for Appetite for Destruction’s 30th anniversary.

Steven Adler discussed how he and Izzy Stradlin have reacted to Frank Ferrer and Richard Fortus taking their jobs on the Guns N’ Roses Not In This Lifetime tour in a new Hysteria Mag interview.

“The thing about Guns N’ Roses that made us so great and so magical is because we were a magic band, like Led Zeppelin, or Aerosmith, or Queen,” he continues with an air of ennui. “Once we were together we couldn’t do anything wrong. If one person left the band and did Appetite, Appetite would not be Appetite. And it’s a shame because Use Your Illusion when we did the demo tape, I kept saying, or we kept saying, it was gonna be bigger and better than Appetite but once they kicked me out of the band, part of the magic was gone. It’s a different band. A completely different band.”

For Adler, there’s never too much damage done that the chance for reconciliation has passed. “You know, if they want me, they know my number–I’m ready to rock,” he says. “My goal was to finish what I started, and Izzy’s too [former guitarist Izzy Stradlin]. Iz is just as heartbroken as I am that the three of them decided to leave us out and bring three strangers in–who are those people? It’s just not cool.

Also, if you’re a big Guns N’ Roses fan, listen to the latest episode of the Appetite for Distortion podcast below.