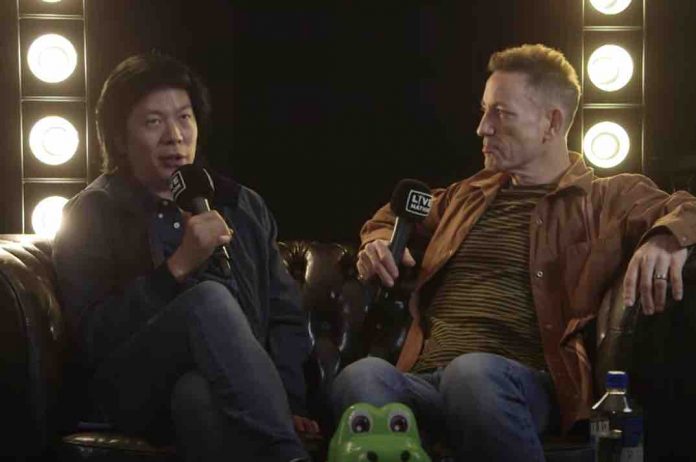 Jeff Schroeder revealed that he and James Iha are working together in Los Angeles on The Smashing Pumpkins’ new album.

Jeff told Audio Ink Radio, “It’s transformed the way that I work in that he is relentless for greatness.

“One thing that I always tell people is – ’cause he has maybe a reputation for being difficult in the studio or something like that – but he absolutely doesn’t put any expectations on anybody else that he doesn’t put on himself, as far as quality of performance.

“He relentlessly, from an artistic standpoint, pursues his ideas, and that is the best lesson to learn. And then another one would be that he’s unabashedly unique.

“And that’s another thing that I’ve learned is that there’s different types of musicians and there’s musicians that will go out and get hired by a band to be a backing band guitarist or drummer, and those are very valid and great ways to earn a living and make a living.

“But then there’s also musicians of a different ilk, that maybe bring a different sort of quality to the table, and that is being absolutely unique.

“And that’s really inspiring. And that takes a lot of courage, devotion, and dedication to cultivate that type of uniqueness – because it’s scary, it’s vulnerable, whereas it’s easier to copy other people.

“But to be completely unique and be yourself is the hardest thing to do. And he’s been quite successful at it. So, that’s something that I definitely don’t not-notice every day…

“And [drummer] Jimmy Chamberlain is the same way, and [guitarist] James Iha is the same way, too, as far as they do all these things that are completely idiosyncratic and unique to them. And so it creates a sound.

“And then, for me, that’s been something that I have tried to…I would never be in a position to evaluate myself to see if I’m successful or not at it, but I think in pursuit of greatness, those are the types of things that I’ve learned from being in a band with those [people]: with Billy and Jimmy and James.”

He said about the band’s new album, “We’re about halfway through working on another big album, which is, basically, I guess, a sequel to ‘Mellon Collie [and the Infinite Sadness]’ and ‘Machina’, so it’s the third in a trilogy – more of a concept-based album. And this one is 33 songs.

“We’ve been working for a long – almost, basically, the whole year on it. But we’re in the middle of real tracking and stuff right now. James and I are working out here in L.A. Drums are basically done, so Jimmy’s done his part.

“But Billy is working in Chicago, and I’m out here in L.A., and James is in L.A., so we’re plowing through it. That’ll probably take most of the rest of the year, ’cause it’s a big, sprawling thing.

“It’s been very challenging to work on a piece that big because even for me as a guitar player, usually you’re always kind of working on things and you have a bunch of ideas to try on these new tracks.

“And then, after four songs, you’re like, ‘OK, I’ve gotta come up with some other stuff.’ So, then, you work hard and get through the first 11 songs, and you’re. like, ‘Oh, wait a second. That’s only the first act. I’ve got two more acts to go!’ [Laughs]

“So, you’ve really gotta dig in deep. You’ve gotta dig deep into your soul to find out what is in there. What’s this song calling for? How can I listen to this song differently than I listened to the last one? And it really pushes you artistically.

“Some days it’s hard, and we fail. I fail. And then you come back the next day and try again, and it’s rewarding when you go, ‘Wow, yesterday sucked, and today is actually quite good on the same song.’ So it can be fun.”