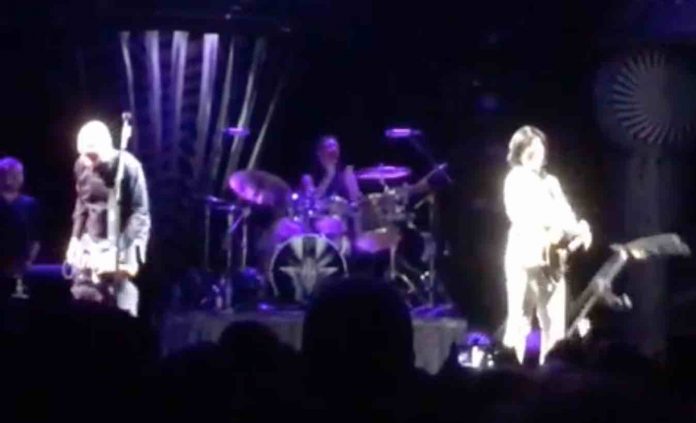 The Smashing Pumpkins kicked off their 2019 European tour in Oslo, Norway on Thursday night. During a funny moment, James Iha threw down his microphone onstage after telling a hilarious joke, which you can see in a video below. The band also performed several songs that James Iha and Jimmy Chamberlin have never played live, including “Tiberius” off of 2014’s Monuments to an Elegy. They covered Pink Floyd and The Rolling Stones as well.

“A thank you, universal in nature, for being here. For the mighty SP embarks on another European tour, 31+ years on. The wildest of rides. And so many friends made along the way. The other day I found myself musing on a much beloved musician, the kind everyone liked to like (I like them, too), but certainly their music is not respected per se as I’d hope I’ve gained some modicum of it from you. Anyway, I said to a friend, if I had it to do all over again I’d still choose the harder road in music and in public life.

The road less traveled (a poem which always spoke to me, obv) versus one of back patting and slavish, numbing approval. Not everyone agrees with that inclination, and I can certainly respect why: life is short, and why be grim when you can party, or laugh, or yeah, be liked? I said many, many times when I was young (in my 20’s) that I’d have preferred (and this was honest, btw) to belong, to not be some loner outcast archetype against the grunge cash grab. That if I’d been made to feel I belonged as a teenager there’d be no Billy the Vampire Bat, or Zero, and so on. So note: I DID WANT TO BELONG; it just didn’t happen.

But it’s not in the Corgan or Maes bloodlines, anywho, to be-long. It’s not who we are; confusing as that is to us. My son is the same way. He is just is a natural iconoclast. He doesn’t try to be that way, he is that way. And the world, particularly now, needs it’s windmill chasers and it’s linguistic assassins and yes, it’s ageing Goths. Long live the Goths. And God bless you who hath made this crazy dream possible. In you, you have made it immortal. And it will outlive us all, which is majestic. So thank YOU. As they say in Cali: you are rad.

See you at those shows, SP and WPC, too. Lots of music, new memories, new memes. New stupidities. The true Gods will roar. And the little gods will cower behind their manicured beards and plastic weapons of mass destruction. Bite from the apple ye saints, the poison will do ye good…”