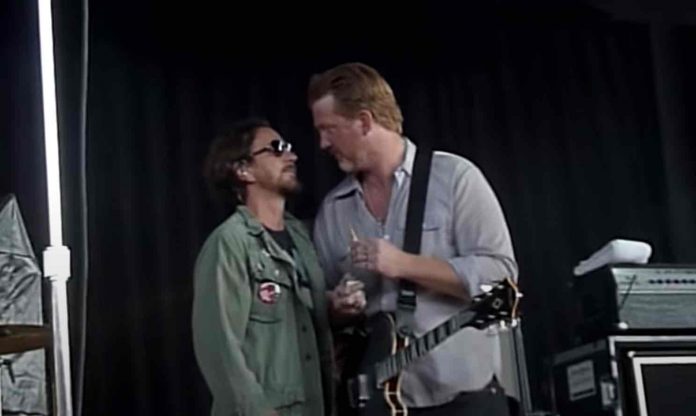 Queens of the Stone Age frontman Josh Homme has made his first public appearance after Mark Lanegan’s death, attending Pearl Jam singer Eddie Vedder’s concert in Los Angeles on Friday night. Homme stayed in his seat for a few songs before leaving. Sea and John provided a setlist and recap on the Ten Club board.

Eddie Vedder’s wife Jill Vedder trashed Homme in 2017 for allegedly kicking a female photographer at a concert. She wrote, “I’m so very sorry this happened to you … this guy is a piece of shit .. never liked him… I’m horrified .. and truly disgusted …”

Chelsea wrote on Instagram, “Thank you everyone that has reached out with supportive messages. A small update, as I’m being flooded with questions:

My neck is a sore, my eyebrow bruised and I’m a bit nauseous. The doctor released me early in the morning.

Here are three images. Two of them as Josh looked at me, smiled and then kicked me.
The other one is later after he cut his own face with a knife. I was in the pit in tears – and he just stared at me smiling.

Assault in any form is not okay, no matter what the reasoning. Alcohol and drugs are no excuse. I was where I was allowed to be, I was not breaking any rules. I was simply trying to do my job.

I hold nobody accountable for this but Josh himself. KROQ has nothing to do with this and I will always support them.

The irony is someone had thrown an ice cube on to the very slick catwalk before the QOTSA set. I was afraid that one of the band members might slip and hurt themselves so, when the lights went dark, I used my arm to wipe down the runway so nobody would hurt themselves.

Thank you to @variety for their immediate concern and care with this matter.

As of now, nobody from QOTSA has reached out to me.” Jill Vedder was also spotted at the concert, so the two running into each other would have been rather interesting.