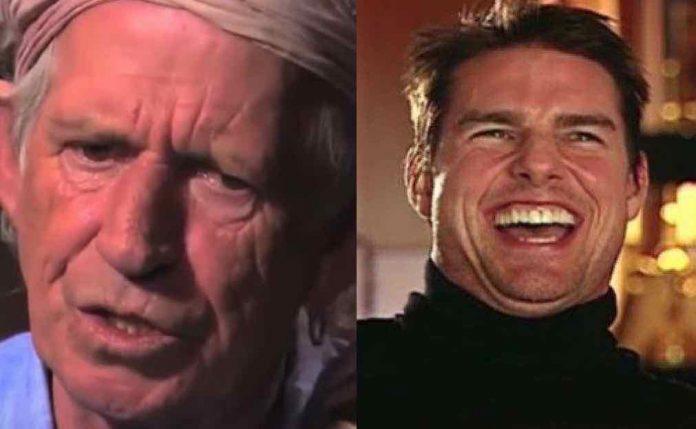 The Rolling Stones guitarist Keith Richards partying with the always creepy Tom Cruise and legendary Bruce Springsteen was recently revealed in a rarely seen photo on Twitter. Keith Richards forgetting how to play a song was just called out by Foo Fighters.

The Rolling Stones fans recently discussed the meaning of “I Think I’m Going Mad” on IORR.org. Drewmaster posted, “I love, LOVE this track!!!! There are actually a few different versions floating around, including the one that 24FPS posted. I love all of them.

Why? The lyrics are so beautiful and devastatingly sad. Jagger sings this one like he means it. The guitar sound is phenomenal; it has that wonderfully resonant, echoey twang that you hear on a lot of Stones tracks from this era. Charlie’s drumming is superb. Keith adds some lovely touches with his piano work and harmony vocals. The sax is gorgeous. And the production is superb. It’s just a great track, one that has been there for me at my lowest lows and still haunts me in my dreams.

Below is another version. Listen to how beautiful the guitar licks are that start at 2:53 (and especially that gorgeous chord sequence at 3:13), and then Jagger’s stunning delivery of the lyrics … Keith, Ronnie, and Charlie right there behind him, everything clicking perfectly…

This is pure, unvarnished Stones magic. God do I love this band!!”

Keefbajaga said, “Ever since I’ve read this thread, this amazing song is permanently in my head…..

And the more I do think about it, I come to the conclusion that this song is maybe one of the most important songs in their catalogue…

Between the lines I do read that Jagger is suffering about losing his youth, about times passing by, and maybe he did say in some way ‘goodbye’ to The Rolling Stones of 1963-1978….

Around 1979 they just finished their recordings in Paris and Nassau, and they had just enough stuff to make ER and TY…. and after that everything was uncertain….

It is a sad song, and really some closing song. A Kind of ‘Time Waits For No One,’ but much more to the point…much more authentic.” A crazy Keith Richards and Robert De Niro claim was made a couple of weeks ago.