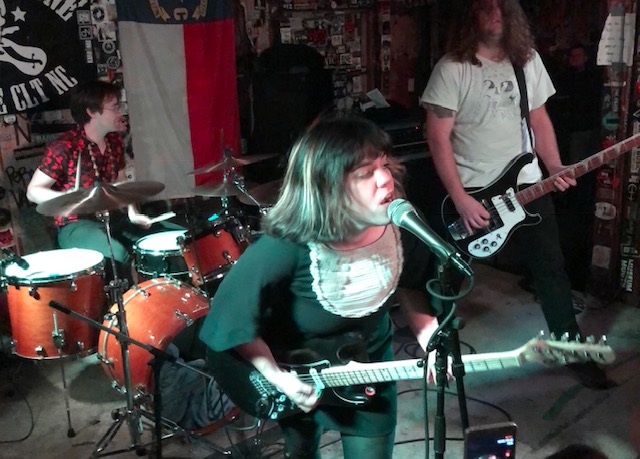 “There’s many things you can do. You can jump, dance, stand there, and just smile. But throwing your elbows around and into each other is just rude.” So chided Marissa Paternoster, lead singer, guitarist, and powerhouse leader of Screaming Females at The Milestone Club in Charlotte, NC. Less than half a song later she was throwing out a belligerent mosher who didn’t following her instructions.

“Get out!” she exclaimed, and, to his credit, the overzealous fan immediately complied. There was no place for physical violence this night. There was enough of it in the news on this horrific day of threats of violence aimed at former and current political leaders and news organizations. Screaming Females and their tour mates, Minnesota’s Kitten Forever, were there to rock, but just as importantly, to provide a safe and cathartic explosion of pure rock n’ roll energy.

Screaming Females did just that, and more, throughout their set. Dynamite, especially of the rock n roll kind, comes in small packages. It’s a tired cliche, but in Marissa’s case, it’s an absolute truth. Marissa is more than just a gifted rock guitarist, singer, and songwriter. She is a commanding and authoritative presence. Easily, she whips the crowd, from the most reserved to the most animated, into a frenzy with her performance. Just make sure you respect your fellow concert goers. Marissa’s authority can land squarely, and righteously, on you.

It’s unfair to focus on one small event of a show. Even if that event set the tone and spoke volumes for Marissa’s command of her audience and show. For the overwhelming majority of the time, the show was pure rock n roll joy. Marissa lead her band through a set heavy with songs off their latest album, All At Once. They are touring on that album currently after all. Throughout the set Marissa’s tiny speaking voice, heard only sparingly, erupted into a powerful melodic yell. That yell fuels Screaming Females’ heavy guitar attack while she sings. She has one of the most unique female rock voices ever. It compliments her guitar playing perfectly. Marissa’s billowing solos, often laced with reverb, delay, and echo effects, combine with her straightforward hard rock guitar lines to bludgeon and elevate her audience simultaneously. The noise Marissa makes with her guitar, and trusty stomp box of assorted pedals (which apparently malfunctioned during the 1st song-to which no one noticed, besides Marissa herself) is just as astounding in its range and strength as her voice is when she cuts loose.

Equaling Screaming Females in energy, if not in diversity of guitar noise, were their tour companions Kitten Forever. The Minneapolis punk trio of three women, Corrie Harriman, Laura Larson, and Liz Elton, utilize a stripped down sound. The only instruments the trio utilize are a drum kit and a bass guitar. Coupled with their uniquely distorted vocals (they sing through an old telephone receiver mic) Kitten Forever’s performance distinguishes them as something to behold. This is especially true when they abruptly (and spontaneously) switch musical roles on stage every few songs. Each member is well versed, and talented, in each role that the band’s format calls for. Each sing, and play drums and bass, with the same commanding authority.

With their over the top makeup, mix of school-dance attire, torn hose, and couch potato sweatpants, Kitten Forever are the epitome of punk aesthetic through and through. Underneath all the punk glitz and snarky visual slaps at “girlie girl” culture though are three hard working musicians who truly gel onstage. They play each (and every) role in their band better than a host of other similar cookie cutter punk acts. Most of the crowd was there primarily to witness Screaming Females’ guitar heavy performance. Admittedly, I was as well. Not only was I pleasantly surprised by Kitten Forever though, but the two local acts that preceded Kitten Forever on stage ended up being worth arriving early for. The first band to play, named Alright, dropped way more drone than expected to go along with their topically buoyant pop-punk riffs. Fellow local act TKO Faith Healer was the kind of quirky psychobilly/70s rock act that would have found themselves comfortably at home in Seattle pre-Nirvana/Soundgarden explosion.

The diversity of the musical talent, coupled with the concern for their audience (physically and musically) displayed by all the acts that night, and especially by Screaming Females, demonstrated of the power of such diversity to inspire, while commanding your respect.