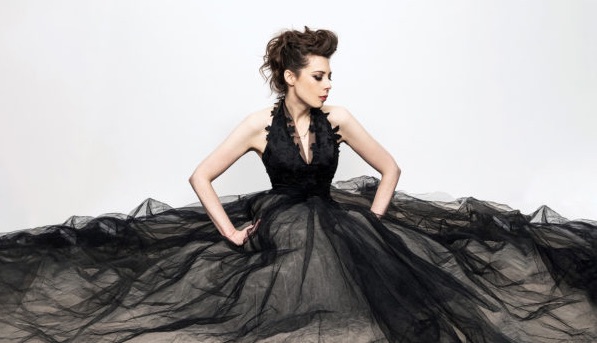 I love it when I hear an artist that uses tons of different influences and sounds and throws it into themselves and then they come out creating something so good and so unique that you’re just stunned by how well everything works together. That’s just what we’re talking about today in the Indie Rock/Pop songstress Louise Aubrie.

Louise Aubrie has announced the release of her 5th studio album ‘Antonio’, due October 15, 2021 on all platforms. ‘Antonio’ is a truly transatlantic affair; written in New York, recorded in London, and mixed and mastered in Los Angeles.

“The title is inspired by a line from the Jacques Brel song ‘La Chanson De Jacky’: “Même si on m’appelle Antonio” – “My name would be Antonio”. It’s a brilliant fantastical song about fame being fleeting, and imagining how life might be in the future: being washed up, reflecting on the glory days!! Marc Almond did a brilliant cover of it – one of my favourite songs – and I created a vision of who Antonio might be: an aging European lothario going round the clubs. A lot of the songs were inspired by that image – I don’t know anyone called Antonio in the real world!”

I was lucky enough to hear a very new song that will be included on the album. The title of the song is ‘Ours’. The song itself is really such an incredible trip. There are surf rock guitars, pop beats, and the voice of a beautiful songbird.

While you wouldn’t think that surf rock guitars could fit such a song, that’s exactly where you would be wrong. Somehow, someway, they did such a masterful job with ideas when mixing this song together that everything that would seem out of place is right where it needs to be and it’s beautiful.

The song sounds like a mix between the 60s and the 80s all in one, but yet, still super modern which I still can’t get over how well this is being executed. The overall vibe is dark, yet, there is such a bright light throughout the song that keeps you hopeful.

You truly do have to hear the song to totally grasp what I’m talking about or you will go on for hours in your head trying to figure out just exactly what this sounds like.

The term when I listen to this track is ‘genre bending,’ I love the fact that more and more artists are doing this, but how many pull it off incredibly? Sadly, not many, however, Louise is one of the very few that make it seem so effortless to do it all so well.

I really feel that this genre bending that is being done by Louise will for sure make her stand out from the crowd and I truly hope that the rest of the album is as surprising as this song was. I know that her fans will love what’s to come and I am almost positive that many more will flock to this new sound that sounds like it’s hers and hers alone.