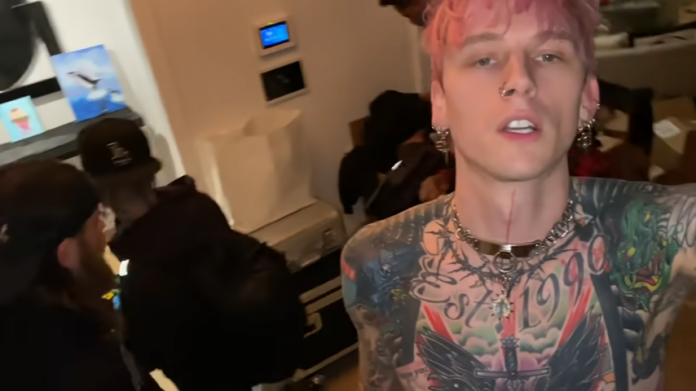 The popular rapper turned pop-punk sensation, Machine Gun Kelly was recently accused by a viral social media star for embellishing part of his live performances. Now, the popular yet controversial A-lister is shooting back in response as Dexterto is reporting. The social media star, a guitar center employee named Gunnar DüGrey has nearly 675,000 likes on the social media platform – TikTok. DüGrey would make the accusation earlier this month that Machine Gun Kelly would frequently use a killswitch to imitate his guitar being played.

“I’m not making any definitive claims here but it certainly seems like he doesn’t use it for much other than muting his guitar while he plays,” would state in the original video uploaded that has over 600,000 likes on its own merit. However, on March 9th MGK would respond to the viral video and to the claims made by DüGrey. Kelly would do this by showing that on his model, the downed killswitch doesn’t render the guitar silent.

The social media star would then reply once again, stating that he was wrong as he added: “I was wrong, and I’m happy to admit that.”

In other Machine Gun Kelly news and notes, the entertainer made an appearance on the Ellen Degeneres show where he admitted that he would love to see popular K-Pop group BTS perform at his wedding to Megan Fox. The two became engaged on January 11th after a year and a half of dating. The two stars would first meet in March 2020 on the set of Midnight in the Switchgrass, a 2021 crime thriller film in which both of them starred. They started dating in May 2020 Credit to NME for the below quote.

“[But] Which band do I surprisingly know all these facts about? BTS… I think I have a better chance of getting BTS to come.”