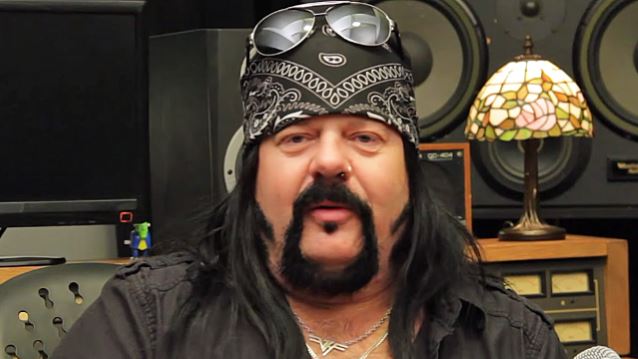 According to Las Vegas Review-Journal columnist John Katsilometes, the official cause and manner of late Pantera drummer Vinnie Paul Abbott’s death from the autopsy by the medical examiner is still pending. There is no timeline for Clark County Coroner’s release of that information.

Katsilometes tweeted, “Latest from @ClarkCountyNV officials: Cause and manner of #VinniePaul’s death is still pending. No timeline for release of that information.”

Vinnie Paul passed away on Friday at the age of 54. He apparently died in his sleep at his home in Las Vegas, and sources close to the musician told the Las Vegas Review-Journal that he suffered a “major heart attack,” but that information has not been corroborated by an official source. After an official cause of death has been determined, Vinnie’s body will be flown to Texas to be buried between his mother and brother.

Tragedy befell the world of heavy metal with loss of drummer Vinnie Paul. Along with founding Pantera, Vinnie Paul’s current band- Hell Yeah, a supergroup Paul formed with members of Nothingface and Mudvayne, has been a mainstay of rock and heavy metal for the past ten years. A self-identified hard rock and heavy metal enthusiast, Vinnie Paul’s drumming carried an undeniable characteristic and by hearing just his kick drum, you could identify the drummer. His personality was as large as his bombastic drummer.  In an era where Heavy Metal struggles in America to hold its footing along the likes of rap and pop, his death is nothing short of a heartbreaking blow- not only to his family, fans and band members- but to the metal community as a whole. Vinnie Paul was 54 years old.

Along with vocalist Phillip Anselmo, bassist Rex Brown and his late brother, Dimebag Darrell, Vinnie Paul spear-headed the groove metal movement. Combining harsh, aggressive vocals, shreeding guitar and a swinging rhythm section, never existed a beast quite like Pantera; and never again has one. Throughout the late eighties and early nineties, Pantera helped inch heavy metal closer and closer to the mainstream. And no- that move didn’t happen because of a change in the philosophy of the Texas-based groove metal pioneers sound- the mainstream just kept finding a way to get closer to them.

The solidification of this arrived in 1994 when their album Far Beyond Driven debuted at number one on the Billboard Top 200. The heaviest album ever to do so. And during the height of grunge- a time where everyone and their mother were wearing flannel shirts and swimming in apathy, Vinnie Paul and Pantera stood tall, proud and absolutely on a level all their own above their peers.

Vinnie Paul created a drumming style that wasn’t necessarily unlike anything you heard before, but one that came off so effortless, you couldn’t help but be inspired. On “Becoming”, from the aforementioned Far Beyond Driven, he delivers double-kick blast beats offsetting a straight up the middle beat. But it is in the execution that he glides between the two that is where you’re left really wondering how the hell he is doing that. Along with Rex Brown, Vinnie Paul created one of metal’s most fascinating rhythm sections. Whether keeping it simple and to the point with “Walk” or his signature intro on “5 Minutes Alone”, Vinnie Paul dominance and love of his craft will forever carry on.

Vinnie Paul will be sadly missed. From his Peter Criss inspired “Catman” beard, to his cowboy hat, to his big grin, there will be another one quite like him. Vinnie Paul was preceeded in death by his brother, Dimebag Darrell. You can’t help but think that even in light of this, somewhere the two are now reunited. And for whoever else may be there with them, one thing is for sure. They are about to get their asses kicked and their faces rocked. And it will be a damn good time.

Latest from @ClarkCountyNV officials: Cause and manner of #VinniePaul's death is still pending. No timeline for release of that information.