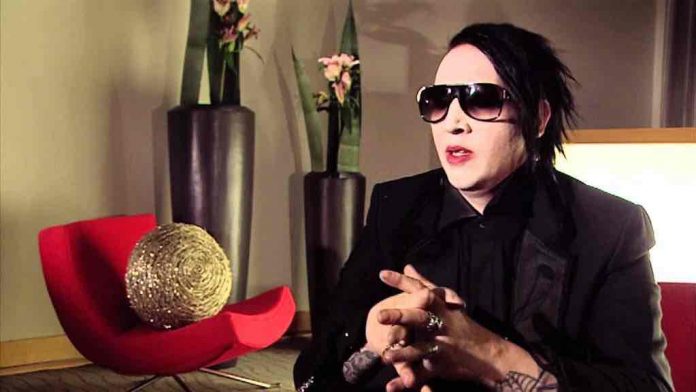 Marilyn Manson surely has been in the press a ton lately. At first, it was coming off of a new record that had fans ready for Manson, and then that was halted by some very deep allegations that involved Marilyn Manson being an abuser. The abuse allegations still are there and we have many questions that have been left unanswered by Marilyn Manson or anyone on his team. At this rate, we’re unsure if Marilyn Manson will ever come forward and say anything that could make such a stain go away at all.

With all of this said, now we see that Manson is raising some eyebrows again and not in his unique shock-rock fashion either, no. These new allegations are something that there is just no excuse for as much as there was no excuse for the supposed abuse that was said to be given out by the ‘Anti-Christ Superstar.’

It has come to light that Manson may have used some very offensive slurs in the past. From Rolling Stone, the following was stated about this whirlwind that Manson has found himself in as they went back towards the beginning.

Per Rolling Stone, the following was stated: “Brian Warner (Marilyn Manson) was also getting a reputation for using racial slurs. “He said the n-word quite a bit,” recalls an associate from later in his life, who felt that Warner “almost reveled in being able to say it in front of Black people.”

The article continued: “In 2001, Warner faced criminal and civil charges brought by Joshua Keasler, an Ozzfest security guard who accused Warner of grinding his crotch against him at a Detroit show. The lawsuit was settled out of court, and Warner ended up pleading no contest to disorderly conduct after a sexual-assault charge was dropped.”

Rolling stone closes: “Keasler says now that he’s been upset to read of more recent assault allegations against Warner, and he wonders if his legal case 20 years ago could have done more to protect women: “Had he been a registered sex offender, maybe one of those young ladies would have considered a little longer before they thought, ‘Maybe this isn’t the guy I want to hang out with.’”

It should be noted that Marilyn Manson had no problem covering the 1978 track by the Patti Smith Group with a very racially charged title to which Marilyn Manson later put out.

There’s a line between shocking people and just being flat out offensive and disregarding others. Sure, many can say that the 90’s or whatever era were a different time, but in my opinion, there never was an era where any of this was okay. It was a problem then and it still is a problem now.

Why any of the offensive things of the past have flown under the radar for so long in the world of entertainment is beyond me. I’m not sure I could answer that question and do it justice correctly. However, it’s a new era where we hold people accountable for their actions and we will continue to do so. There is, of course, one thing to be said about mistakes and rightful justice, but that does not hold any excuse for abuse or racism.