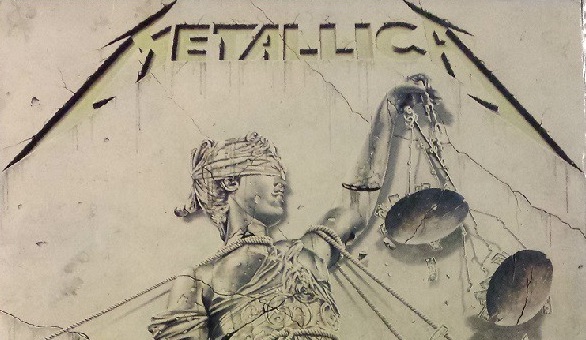 Metallica released …And Justice For All on August 25th, 1988. The album proved to be a  heavy metal middle finger to the brand of status quo glammed out, pretentious hair metal that dominated MTV and the metal community in general. No spandex. No makeup. No hairspray. And not a single eff to be found. Metallica presented the metal world with their most brutal, technically complex and progressive piece of work yet. To simply say the album made an impact would be a grave understatement. The follow-up to their landmark 1986 album Master of Puppets, …And Justice For All saw the band take their brand of unapologetic metal closer to the mainstream world all while rocking faster, heavier and completely more than insane than before.

The year was 1988. Hip-hop was continuing it’s impressive climb to becoming one of the strongest genres in music. Bubblegum pop garbage and post-New Wave bands continued to be well represented in the music community. Alternative rock was slowly gaining momentum- creeping along before it’s huge explosion to come at the turn of the decade. And the aforementioned hair metal was still the most commercially viable and aesthetically pleasing form of hard rock and metal. MTV was littered with generic, copycat hair metal bands with videos filled with excess, strippers, and uninspired music destined to be laughed at for years to come. Yet Metallica- as they always have, continued to do what they wanted, when they wanted and how they wanted. Metallica killed hair metal dead by staying true to their sound, though it took a few more years for those bands to fade away.

With it’s iconic cover of a disgraced Lady Justice, the band’s fourth album marked the end of the era known as “Old Metallica”. Because in the years to follow, the period of Kill ‘Em All, Ride the Lightning, Master of Puppets and …And Justice For All would be acknowledged as the type of Metallica fans longed for while the band flexed their creative and stylistic muscles.

But still. Of the “Classic Four”, Justice is the often overlooked- if not slightly forgotten one of the bunch. But Why? Say what you will. Think what you may. But Justice is the definitive Metallica album. Here’s why!

Blackened is the End…..Or is it?

Even though Metallica’s eponymous fifth album, The Black Album is oftet looked at as the band’s first big transitition, …And Justice For All really marked the first big change for the band. And that change came with the untimely death of bassist Cliff Burton. Following his death in 1986 in a bus crash while on tour, it would have been easy for Metallica to call it a day. Tragedies like that are never easy to come back from- especially considering that despite their legendary status in the metal world already at that point, the members of Metallica were only 23 and 24 years old. Three albums in and their explosion into the world could have come crashing down in one heartbreaking moment.

Not to be, though. With the addition of bassist Jason Newsted, Metallica charged forward. It’s hard to gauge the impact of Jason Newsted due to the insanely guitar-drum heavy mix that leaves the bass guitar mostly inaudible throughout. But Jason Newsted is as important to Metallica as any other member. His fresh energy and enthusiasm carried the band during this dark time. As a player, Newsted’s true prowess and undeniable ability to groove would be felt later on his other three studio albums with the band. While his bass may have been quiet, his presence was not. What Jason Newsted did provide immediately was “Blackened”. The album’s punishing opening track sets the stage much like “Battery” and “Fight Fire With Fire” on previous albums. But with “Blackened”,  their is an anger- and a power. With it’s crazy grooves and break-neck-pace, the song has lived on as live staple and fan favorite to this day.

The Shortest Straw That Broke the Camel’s Back

Metallica rose to the top of metal without the aid of radio- and more importantly, MTV. I mean, can you imagine a video for “Master of Puppets” with Metallica drinking champagne at a strip club? No, not really. They didn’t fit the mold and didn’t want to. But on Justice, the band entered the world of music videos…in one of the most bizarre yet absolutely awesome ways possible.

Metallica’s video for “One”, their first ever music video featured the band performing the song in a dark room. No bells. No whistles. But! It does feature clips from the 1971 anti-war film, Johnny Got His Gun. Let’s be honest for a second if we can. In the age of Warrant, Whitesnake and all those other “W” hair metal bands, this is so far beyond the realm of what you’d expect. It’s just magnificent. It’s like Metallica saying, “Alright. We’ll come to your stadium. But we’re not playing your game.”

The band’s first exposure in a mainstream way blew the god damn doors off the thing. Metal’s amazing, underground favorite sons were now on display for all the music world to see- and man did they get a sight! No hot chicks prancing around. No gimmicky rock and metal cliches. Just Metallica. On Metallica’s terms. Ah yes. And clips of a soldier who lost his arms and legs and is trapped inside his own body and mind. Classic.

True Metal is In the Eye of the Beholder

By this point, the boys in Metallica were well known for taking their love of metal, sprinkling in a little classic rock, swishing it with British Heavy Metal and shoving it through the filter of punk rock. While their arrangements had always raised eyebrows and their precise, super-tight instrumentation was a highlight, on Justice, the Bay Area Thrashers introduced an element of progressive rock. Crazy time changes, songs pushing past nine minutes and technical precision for days define Justice.

It’s far less Thrash and way more Progressive. Instead of the constant, crushing of heavy metal domination, the songs on Justice play off much more like roller coasters of metal mastery. “Eye of the Beholder” and “The Frayed Ends of Sanity” are just two infamously overlooked songs. And for the latter, the nod to the Wizard of Oz is just one of many fantastic Easter Eggs hidden throughout Metallica’s vast catalog.

Metallica’s total shift into Progressive-Heavy Metal can almost singularly be blamed for the band switching gears on their follow-up. Between the title track and “To Live is To Die”, the band really took this brand of metal to it’s absolute zenith. Sometimes when you take things so far to one extreme, the only thing to do next is completely swing the pendulum back the other way. Justice is like Black Sabbath meet Rush meets The Ramones. And every moment of it is glorious. The lead guitar work of Kirk Hammett stands out as it reached unprecedented heights all while serving each crazy turn and twist of the manic mashup of genres, leaving aspiring guitarists shaking their heads in awe.

The Ecstasy of And Justice For All

…And Justice For All is punishing. Now I know you all want to claim it to be St. Anger, but Justice is truly drummer Lars Ulrich’s top performance. The progressive nature of the music lends itself well to crazy drumming but even still, his double-bass work and his insane ability to have drum fills come across as a melody are wonderful. Plus, “Dyer’s Eve”. I mean, there’s fast- and then there’s “Dyer’s Eve”.

Lyrically, James Hetfield owned everywhere on this album. Not one wasted lyric.. His poignant attack on justice throughout the title track and the overall theme of injustice provides a furious anger almost up to par with the brutality of the music itself. Control, undeserved power, corruption and the mental anguish that comes with the territory bleed through the lyrics from start to finish. Lines like “Fire! To begin whipping dance of the dead”, “You can have it your own way. If it’s done just how I say” demand your attention at once.

Hetfield does what any great messenger should. He’s not saying you must take his words and follow them to every letter- he’s just reminding you- albeit forcefully, to question what is being told to you. To not take other’s assumptions as your own. And ultimately- to think for yourself rather than be thought for.

In the thirty years that followed, the Bay-Area Thrashers have gone on to become not only the biggest- and arguably most important heavy metal band of all time, but one of the most commercially successful bands of all time. Today, in 2018, their legacy is set. They could never release another piece of music, never strike another guitar chord and it’d all be good. The fact that they have continued at their frenetic pace into their mid-50’s is just plain insane…and awesome.

…And Justice For All fits the bill as “the most” in a number of ways. It’s their “most” musician-y album. It’s their “most” sonically crushing, in your face album. But most of all, it’s their “most” magnificent album. Nine songs of absolute brute force. There’s no let up. There’s no chance to catch your breath. And just like every classic album, there’s no shortage of classic moments that only get better and better with repeated listens. Oh, and “Harvester of Sorrow”. How can we forget that. Forget everything else. I you disagree with everything else, remember, “Harvester of Sorrow” alone makes …And Justice For All the definitive Metallica album!