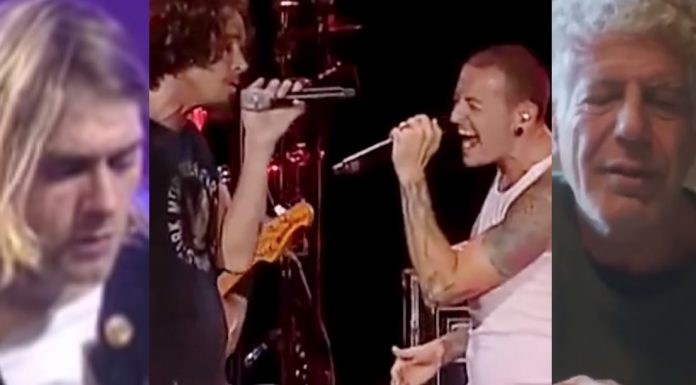 Linkin Park singer/guitarist Mike Shinoda criticized news coverage of celebrities dying by suicide like Chester Bennington, Chris Cornell, Kurt Cobain, Anthony Bourdain, and Kate Spade in a video live stream last month. He mentioned if people aren’t liking how it is being covered, avoiding news/social media to not be tempted to read the stories is a way they can avoid it.

“That is an awesome way to take care of yourself, because there is no reason to, just because you’re curious? Is that a good reason? When they talk about addiction, it’s often been described as having a demon on your shoulder, or a monkey on your back, and the reason that it’s talked about that way is often times it feels like a voice that is telling you to do something. Sometimes that voice is convincing. That little voice doesn’t say, ‘Go buy a bunch of a meth.’ It says, ‘Man, you haven’t talked to Johnny in awhile, you should call Johnny. I wonder how he is doing, he was doing pretty bad last time you talked to him, you should really call him.’ That voice is actually being sneaky in telling you, ‘You need to get in touch with Johnny, because Johnny has the meth.’ That’s the same thing that is going on for a lot of us. For me I’ve never been a drug addict, so that hasn’t happened to me.

What does happen to me and happens to most of us is the very simple and subtle sneaky version of it. You read something and you go, ‘Oh, I’m so curious about that, let me click on it.’ You click on it just so you can get revved up about the information in there. That information in there is telling you the story about Anthony Bourdain, it’s telling you Kate Spade, it told you Chester, it told you Chris Cornell, it told you Kurt Cobain, it told you Lil Peep, it told you all these people. Over and over we go through this. Don’t go for that man. Your attention is a commodity. It’s like money, and you’ve got to be just aware. I want you to be aware of where you spend it.”

Watch the full video below. You can call the National Suicide Prevention Lifeline at 1-800-273-8255.