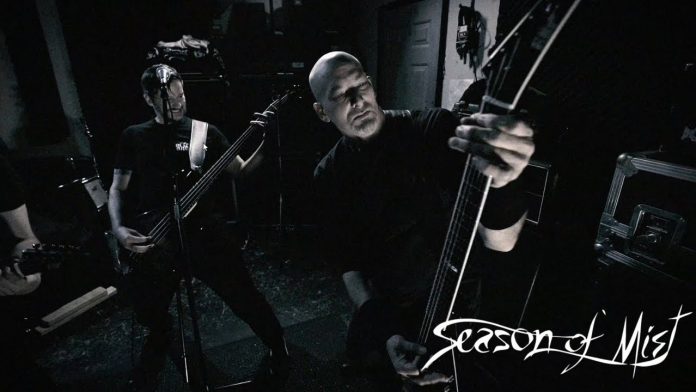 The album sees the powerhouse quartet unleash a barrage of ferocious death metal as violent as it is savvy. Their vicious vocals spit venom, laying bare the ills of a dystopian society gone mad. As rampaging new tracks like the incredible “New Salem,” the title track, and “I Disavow” so brashly prove, Rituals Of Power is world-class modern extremity and MISERY INDEX only grows more powerful with time.

“Rituals Of Power is a disavowal and warning against the consequences of our so-called ‘post-truth’ age,” issues the band. “Each of the nine songs revolves loosely around this theme, yet each track also stands very much on its own. As an album however, they are all brought to life as one ‘reanimated’ monster; it’s roughly thirty-five minutes of unhinged, yet cohesive, riff-driven aural ballistics. We were pissed off and on fire during both the writing and recording, and we think it shows in spades. We set out to write the best album we could, based on what we would want to hear first as fans of this music, and we could not be happier.”

Of the band’s first single and video from the record in “New Salem,” the band notes, “‘New Salem’ sums up perfectly the lyrical vitriol and musical dynamics featured across Rituals Of Power. We wanted to introduce the album, not just with a straight-ahead ripping tune, but with a smack to the face; it’s a wakeup call for any concerned citizen and a code red for civilization. Ugly times call for stark and uncomfortable statements, and ‘New Salem’ castigates the faults and ineptitudes of our broken media system and the Crucible-esque, witch-hunt culture it fuels.”

MISERY INDEX’s Rituals Of Power will be released on March 8th in several formats including jewel case CD, limited LP, limited cassette, and limited deluxe digibox which includes bonus cover tracks — Nailbomb’s “Wasting Away” and M.O.D.’s “Man Of Your Dreams” — as well as a carabiner with key strap and bottle opener, a patch, and three vinyl stickers, and digitally. To buy this album go to: shopusa.season-of-mist.com/list/rituals-of-power.

I was recently able to speak to guitarist, Mark Kloeppel about this recent album and working with Pantera’s Phil Anselmo.

I notice it’s been a five year gap between records

Yeah during those years we were all busy with personal stuff and on the last album we kinda said all we had to say. When you feel you do a good job on something you start to forget the process of what makes them work and you become too critical of the work in progress. We had to put the feeling aside of wanting to top the last record and just made what we wanted to hear.

How did you guys come up with the name?

It’s based on the concept of truth and what truth really is. How it’s kinda being weaponized. It’s tied into human revolution and the constant power struggle we had as a species. We have good movements going on but then the power will corrupt them and the hero will become the enemy in past cases. We talk about historic examples and how it goes on in the present and it ties into political power.

How did the supergroup Scour come to form?

Well Eric used to play bass with Cattle Decap and is now in The Illegals. Adam is from Pig destroyer and John is from Pig Destroyer and Agoraphobic Nosebleed. Four of come from Saint Louis. We grew up playing in different bands. Adam and John are cousins and played in a band called All Shall Fall. We always admired each others bands and became quick friends. Adam joined Misery Index and we helped each other out. We all kinda stayed friends and tried to do stuff together. What happened was Adam and John had a side project called Fulgora. Phil caught wind of it somehow and signed them to Housecore. This started a relationship with John, Adam and Phil. After Derrick had these black metal songs so he wanted to form a band for it. John sent the demos to Phil to try to get him to sing and he said yes. We then started playing shows and when their guitar player left I was the first they called me cause we were close. It was a trip cause I grew up on Pantera and they were a huge influence on me. Phil is a great guy and very friendly. He takes his art seriously. I remember when we jammed he turned the lights off and lite a bunch of candles and said “we have to take the dark insense in”. It was awesome !

Metallica Singer To Reunite With Ex-Bandmate After Feud?