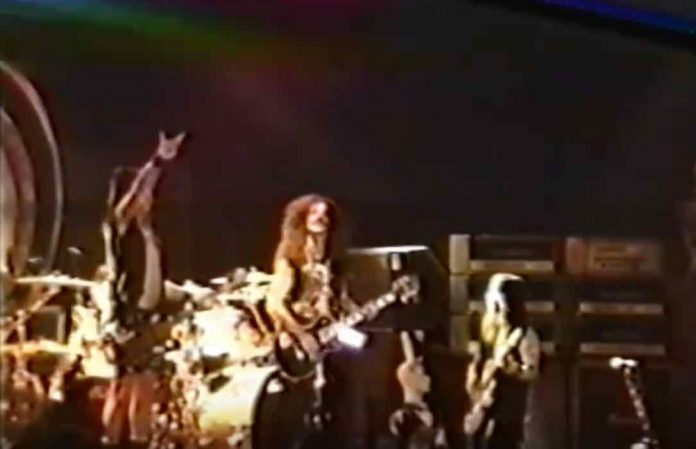 A fan named Deb said, “@Crablegs59 There’s a fake page pretending to be you John…it’s sending messages and following your fans…I reported it as trying to pretend to be you…its @JohnCorabi1 so everyone needs to be aware and report it as fake.”

Corabi responded, “It’s been reported. Thank you. If everyone else can report it, that would be great.”

Suuded later asked, “Was just reminded on FB of this tour in winter 2013 here w/ my friend Mutz who joined you in Hamburg. Please come back to Northern Germany! BTW ist the account @JohnCorabi1 real?”

Corabi shot back, “Thank you. That account is not real. Please report it to twitter.” Corabi also just wrote on Facebook, “July 9th, 1971 GRAND FUNK RAILROAD play Shea Stadium in NYC. They sell it out in 72 hours 55,000 tickets in all. The Beatles Shea Stadium gig took 5 weeks to sell out. GFR’s record of 55,000 tickets in 72 hours was a record that held until 2008 when the Stadium was demolished…Not a H.O.F. inductee…”

He also discussed his winter tour plans, “Hey to all my friends in Europe and the U.K….just a reminder you get TWO (2) Corabi’s hitting your shores this time…Ian Corabi (my son) and Sebastian LaBar (Jeff’s son) are coming with Tantric in November/December for the first time, and yours truly is coming for my acoustic winter tour…We hope to see you guys at the show!!! Feel free to harass Baz, and Ian…😘 Love you guys.” Motley Crue hiring a big name singer to replace Vince Neil was just revealed.

It's been reported. Thank you. If everyone else can report it, that would be great.