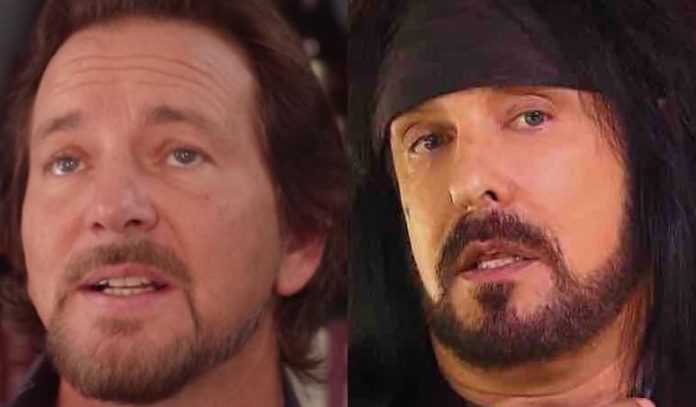 Kerrang asked, “The explosion of Nirvana in 1991 did great damage to Mötley Crüe. Was it fair that you were lumped in with bands such as Poison and Warrant?”

“I have to say that I don’t think that Nirvana and Pearl Jam killed the bands you mention, I think that they killed themselves. They were making copycat music. We, on the other hand, simply imploded. Forget about the lifestyle for a minute – the thing that ultimately allowed us to pull ourselves through was the music that we made, and how good we can be when we really put it together.

Every great band has hills and valleys; they start at the bottom and if they’re lucky they make it to the top of the mountain. But eventually you have to go down. Very few bands are lucky enough to become popular and stay popular forever. That’s just the way music is – it changes, technology changes, fashion changes, and social outlooks change. But again, today a lot of bands are just so fucking safe.”

Motley Crue ‘The Dirt’ director Jeff Tremaine discussed the band’s reaction to the film in a new Vice interview.

“I didn’t feel the pressure of making the film until I finally screened it for them at Tommy Lee’s house. I was super nervous because they had left me alone during the whole production and editing. But I screened Tommy and Nikki the film first, and at first Tommy was like,
‘Hell yeah!’ and started high-fiving Nikki in the theater.

But then the fun starts to turn dark, and by the end Nikki has a huge tear running down his face and they were both just sitting and watching the film silently. When it was over, Nikki came up and hugged me, so I was relieved that he liked it. Same thing for Vince Neil when he finally saw it. He saw his all the ups and downs of his life come to the screen and it was real heavy.”