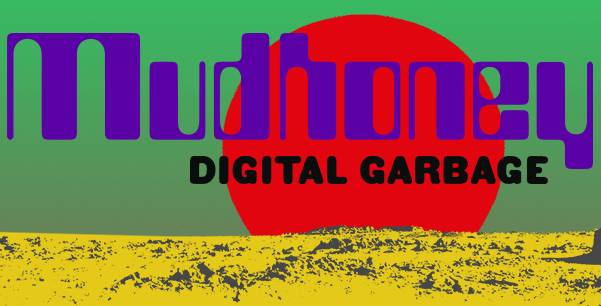 Mark Arm has never been afraid to sing about what’s on his mind, and his band Mudhoney’s staunch insistence on remaining low-fi, and low key, as far as the music industry is concerned, has lent them a special license to truly remain not only DIY, but free to do what they what. On their latest LP, Arm and Mudhoney continue do just that. Taking on the role of the court jester in the era of the mad king, Mudhoney engage in that special truth telling mischievousness granted to such by alternately blasting and poking fun at our current winter of discontent in America. Digital Garbage takes aim at everything from online suicide to mass shootings to sanctimonious “pieces of shit” (i.e. clergy) to adherents to the most American of religions, the prosperity gospel, to the President himself.

While Trump, the specific racists and paranoid bigots who support him, and everyday slaves to social media are bashed by Arm and company, it is religious hypocrites that are reserved for the the harshest of Arm’s ire. “21st Century Pharisees,” “Prosperity Gospel,” “Please Mr. Gunman,” and “Messiah’s Lament” all attack everyone from peodophile priests to church going hypocrites. “He doesn’t give a fuck about your Jesus! And it’s clear that you don’t either!” screams Arm in “21st Century Pharisees.” The best song of the lot attacking hypocritical religious types though is “Prosperity Gospel.” “Fuck the planet/Screw your children/Get rich!/You win!” sings Arm over dual guitar lines, one fuzzy and distorted and one clear and straightforward. The double guitar rhythms draw attention to the two lines of thought that oppose each other in the oxymoronic phrase “prosperity gospel.” Doing things that are anti the spirit of the gospel gets you blessed by God and makes you rich. It’s the metaphor that sums up so much of what’s wrong with America today, and Mudhoney have no problem addressing it with wide eyed clarity.

It’s not only far right religious types and company that are lambasted here though. In the oddly touching, especially for Mudhoney, track “Messiah’s Lament” Arm blasts the type of politically correct thinking that would lead advocates to deride a very specific event in the New Testament. “Turning water into wine/Is dismissed as a parlor trick/That’s insensitive to/The struggles of alcoholics” sings Arm in the song’s first verse. “Look what they’re doing in my name!” laments Arm. Both sides of the political and poli-social spectrum are equal targets for Arm. It’s hypocrisy and bigotry, and the ignorance that drive both, that gets Arm’s goat.

Digital Garbage is not only that rare humorous yet deadly seriously themed album that is perfectly timed. It’s that rare humorous yet deadly seriously themed Mudhoney album that one suspected was always bubbling just under the surface waiting to explode. Mark Arm and Mudhoney couldn’t have let it out at a better time. 30 years in and Mudhoney reveal themselves to be the potty mouthed, politically poignant, pundits that the are, while claiming title to none of the the above. We wouldn’t have them any other way.