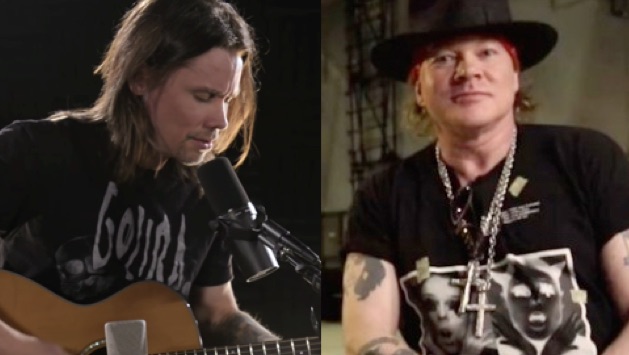 Guns N’ Roses were inducted into the Rock and Roll Hall of Fame in 2012, and Axl Rose was noticeably absent from the induction ceremony, along with Izzy Stradlin. This led to Slash’s bandmate Myles Kennedy singing in place of Axl Rose for the Guns N’ Roses member performance. Kennedy told LA Weekly it was the right thing to do, but it wasn’t easy.

“Initially, the magnitude of that led me to decline the invitation,” Kennedy says. “I remember them talking about it, midweek prior to when that happened. Those are impossible shoes to fill, so at first I didn’t do it. The more I thought about it, about them accepting the award and not being able to play, I thought I’d give it my best shot. I was just happy that they were able to not just get the award but also play some songs. People seemed to be happy and, from my standpoint, it was just the right thing to do. It wasn’t easy by any stretch of the imagination.”

Earlier this year, Alternative Nation had the chance to interview Myles Kennedy over the phone about his solo record Year of the Tiger.

Myles Kennedy is known for singing for Alter Bridge and Slash and the Conspirators. When asked about the differences between putting out a solo record and releasing an album with a band, he said:

“Though I really enjoyed writing on my own and exploring things that I normally wouldn’t approach in the realm of Alter Bridge or Slash and the Conspirators, it was certainly a massive challenge, and I felt like it really helped me evolve as a songwriter. So in that sense, I was very pleased with the process. Any time I get to evolve, I’m excited.”

When asked if he had always thought about doing a solo album:

Later, he was asked if Slash had made any comments about Year of the Tiger.

“Yeah, I think when the title track came out he reached out and was very complimentary and very supportive. That meant a lot to me, I thought it was really nice of him and I really appreciated it.”