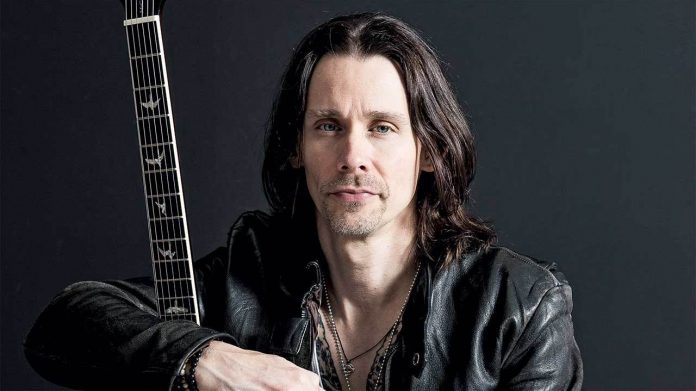 “You know, I didn’t spend a ton of time with him. I met him once and then I got to see Van Halen’s soundcheck with the Alter Bridge guys probably in 2008 or so.

“We were in Baltimore and they were as well, so we got invited by Wolfie to go watch their soundcheck. That was great.

“As far as specific memories that jump out, it was probably just sitting on the floor, watching Van Halen do their soundcheck. David Lee Roth wasn’t there – it was just the three of them and I was just totally freaking out.

“If someone told me when I was 13 years old, that I would be able to sit in this completely empty arena and watch Van Halen prepare for a show, I would have been blown away.

“It was everything I could have wished for, so that was awesome.

“A few years later he came to a show with Wolfie – we were playing the House of Blues in Los Angeles and he came backstage into the dressing room and hung out for a little bit.

“He was totally cool – it was everything I could have hoped for.

“He was just so laid back and chill. Any time that I’ve had the opportunity to meet these massive influences, these icons, it’s always trying to pull the reigns on my fandom and not tun into Chris Farley when he was interviewing Paul McCartney.