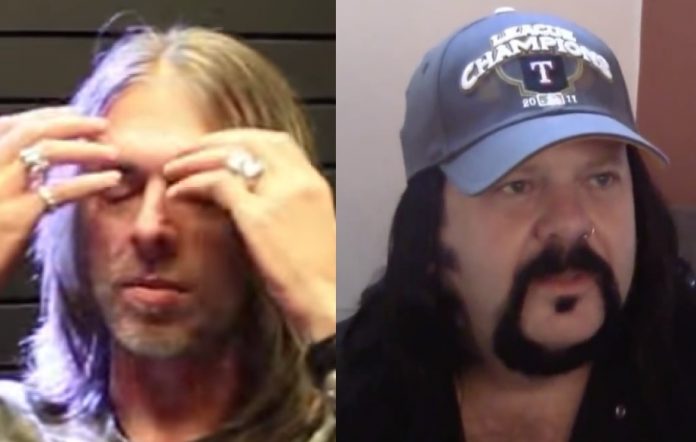 Rex Brown mourned his late Pantera bandmate Vinnie Paul on Sunday on Twitter. Paul died in his sleep on Friday at his home in Las Vegas at the age of 54. Sources are reporting that he suffered a massive heart attack.

“The last few days have been very difficult & painful. At this time, I need more time to process my feelings. Thank you for all the love that has been sent. A formal press release will be coming shortly. Rest In Peace Brother Vinnie!”

Vinnie Paul slammed Rex Brown’s memoir last year as “a bunch of mythology” last year. Brown was critical of Paul in his book

He made his comments in July 2017 during an in-studio appearance on the “Rover’s Morning Glory” syndicated radio show hosted by Shane “Rover” French.

Asked about the way he was depicted in Brown’s 2013 book, “Official Truth, 101 Proof: The Inside Story Of Pantera”, in which the former Pantera bassist referred to Vinnie as “a strange person” who “was always all about the ‘party, party, party'” but “only got laid maybe one out of ten times,” the drummer said: “All I can say is that… I’ll refer to Philip’s [Anselmo] comment about Rex’s book. A bunch of mythology, man. We don’t know where he came up with all this. More power to him, man.”

Vinnie was also asked about his relationship with Anselmo, with whom he has not spoken since Pantera split in 2003. Pressed about whether it’s true that he indirectly blamed Philip for the death of Pantera guitarist — and Vinnie’s brother — “Dimebag” Darrell Abbott, suggesting that some remarks the vocalist had made about Dimebag in print just weeks earlier might have incited the guitarist’s killer, the drummer said: “I’m just gonna say I have no comment on any of that, man. I’m beyond Pantera. I’ve done so many other things with my life since then. And I always believe if you live in the past, you have no future. So, man, I’m happy doing what I do with Hellyeah, and I’m gonna leave it at that.” French, at that point, asked Vinnie if we can safely assume that that there are no circumstances under which all the surviving members of Pantera would ever get back together. Vinnie responded: “That’s a pretty damn good assumption. Yeah, man. [Laughs]”

The last few days have been very difficult & painful. At this time, I need more time to process my feelings. Thank you for all the love that has been sent. A formal press release will be coming shortly. Rest In Peace Brother Vinnie! pic.twitter.com/55DJFpKCqR