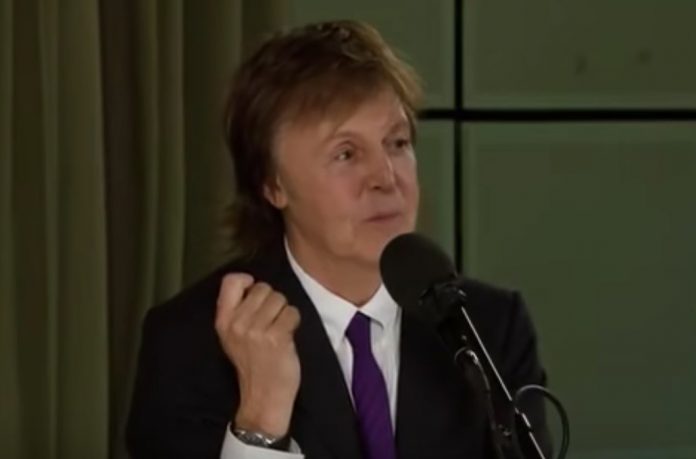 Paul McCartney recently discussed playing new songs at his concerts, and fans not caring at all and going to the bathroom.

PaulMcCartney.com: This question is from @mysweetpaul on Twitter. “McCartney III has been a hit in 2020 and 2021, which led to two Grammy nominations, how do you feel about that? Will you do a live show singing ‘Find My Way’ for the first time? If so, we’ll be sooo excited!”

Paul: I’m now just starting to think about that. Last time we rehearsed we worked up ‘Women and Wives’, so hopefully we’ll include that in the tour. The trouble with that though, is there’s always the eternal dilemma of what do you take out, knowing the audiences really want to hear the hits so you’ve got to balance it very carefully.

You’re taking out something they know very well and putting in something they don’t necessarily know, and I’m always dreading that’s the signal for them to go get a beer. It’s actually a recurring dream of mine: I’m playing and people start walking out, and I’m trying to think of a song that will get them back – “do ‘Long Tall Sally’ – quick!” – but they keep walking – “let’s do ‘Yesterday’!” – it’s typical performer’s insecurities.

I’d like to do a whole show of new songs but that’s for the anoraks in the crowd, that’s for the deep fans. Most of the people who come and see me, who have paid good money, have brought their mums and dads, who have travelled a distance… I’m not so sure they wanna hear the deep cuts. I think they want Beatles stuff mainly, Wings stuff, and maybe some of the new stuff. I force some of the new stuff on them. I know which ones people like because you can see it all light up, all the phones recording… when you say you want to do a new one it’s like a black hole!