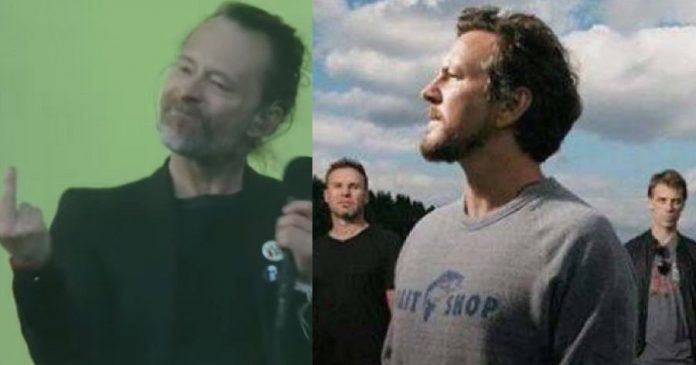 Pearl Jam bassist Jeff Ament believes that Radiohead were disrespected last year when they were not inducted first ballot into the Rock and Roll Hall of Fame. Radiohead will be inducted though into the class of 2019 next year alongside Def Leppard, The Cure, Janet Jackson, Stevie Nicks, Roxy Music, and The Zombies. Alternative Nation transcribed Ament’s comments from a new SiriusXM Pearl Jam Radio show.

“Okay, let’s just talk about how the hell Radiohead did not get in the Rock and Roll Hall of Fame last year on the first ballot. That is insane to me. It leads me to believe that maybe some of those people are still smoking whatever they were smoking back in the 60’s, like the real deal stuff. I don’t know if Radiohead is going show up, I think there was some talk that they might not show up. I think I heard that maybe Colin was just going to show up and play bass, which would be great to. Here is a great bass heavy song by Radiohead, it is called the National Anthem.”