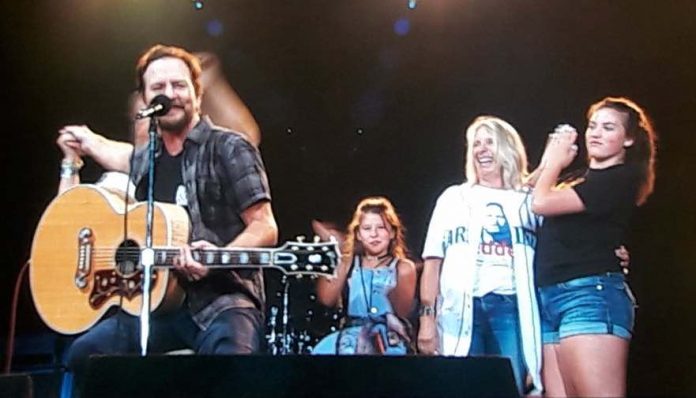 At Pearl Jam’s first show in Seattle at Safeco Field on Wednesday night, Eddie Vedder covered The White Stripes classic “We’re Going To Be Friends.” Vedder performed the song in honor of teachers. Teachers joined him onstage, along with his two daughters.

You can watch video below.

MyNorthwest reports that in January, the band announced it would pledge a minimum of $1 million of its own money toward local homelessness initiatives in hopes the donation would encourage more businesses, individuals and organizations to join in.

Their goal is to raise a minimum of $10 million this year in the initiative called “The Home Shows,” a program that’s part of Pearl Jam’s Vitalogy Foundation to fight homelessness in King County.

So far, more than 140 businesses, individuals, government agencies, and foundations have banded together to help devise a solution.

For instance, from July 31 through August 12, every dollar donated through the Starbucks mobile app or online will be matched two to one, up to $500,000, by the Starbucks Foundation.

More than 80 Seattle and King County restaurants will donate a portion of their sales Wednesday during The Home Shows Restaurant Night. See a list of participating restaurants here.

Other sponsors and partners of the initiative include United Way of King County, Seattle Foundation, Seattle Mariniers, Amazon, Microsoft, Zillow, Expedia, Microsoft, Alaska Airlines, the Seahawks and dozens of others.

The band also created an advisory group of “issue experts,” — from funders to homeless service providers to those with lived experience — to research programs to address homelessness in a variety of ways.

Eddie Vedder singing “we’re gonna be friends” to the teachers of Seattle was magic. #pearljam #thehomeshows