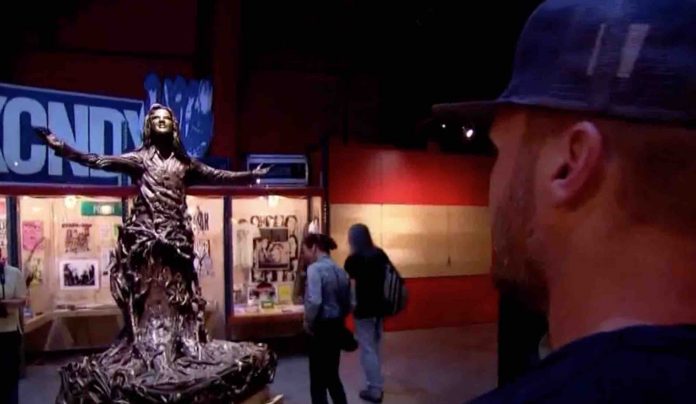 KING 5 Seattle — “That hat right there was in the ‘Alive’ video,” points Pearl Jam bass player Jeff Ament. “I think that hat was in the ‘Evenflow’ video. I bought that hat in Philadelphia on South Street.”

For Ament, Pearl Jam: Home and Away, the Museum of Pop Culture’s new exhibit is a chance to encounter 28 years of head wear.

“Yeah, I was always sort of a hat guy,” he laughs.

The hats are among hundreds of artifacts, including instruments, stage props, handwritten lyrics and more. All celebrating the story of Pearl Jam, a band Ament has now played in for more than half his 55 years.

“You know it’s pretty overwhelming,” Ament says, looking around. “You try to keep moving forward as a band. You try to spend not too much time looking back but this is just the sheer quantity.”

“They like playing music together and they’ve always had really good communication. They’ve been able to talk through the things that I think would have probably broken up a lot of other bands.”

Visitors to the exhibit will be greeted by a striking statue of singer Andrew Wood by Western Washington sculptor Mark Walker. It was commissioned by Ament to remember his Mother Love Bone bandmate, a beatific star whose untimely death eventually led to Ament and Gossard forming Pearl Jam.

“If anybody that I ever met in my life deserved a bronze statue, it was Andy,” says Ament.

Since the band’s formation, Pearl Jam has always had a strong sense of right and wrong. The sold out Home Shows will raise money for, and focus attention on, Seattle’s homeless crisis.

“It’s baffling to think this could happen here. It just doesn’t make any sense,” says Ament. “There’s I don’t know how many millionaires and billionaires in this town and it just feels like there should be a way to share some of that .”

The MoPop exhibit Pearl Jam: Home and Away runs through early 2019.