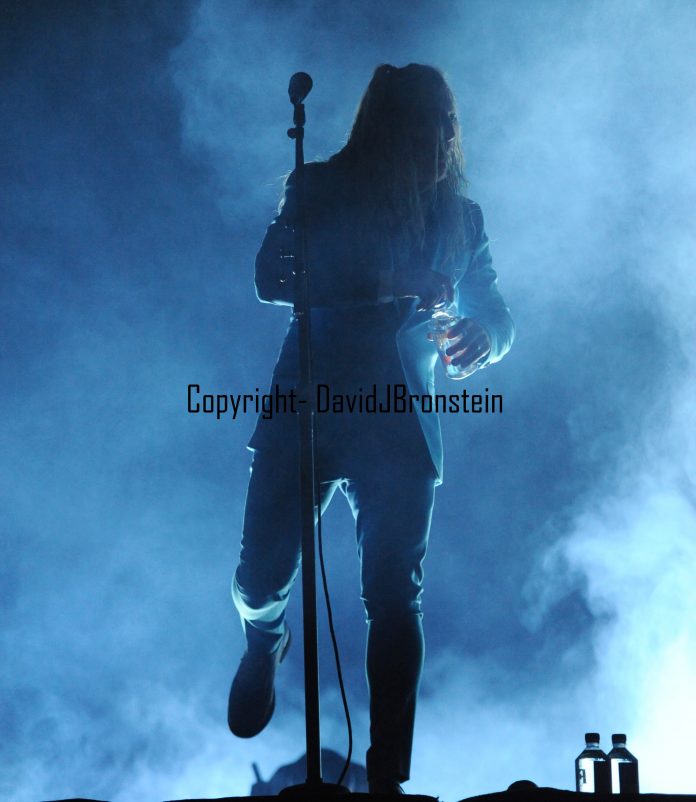 A Perfect Circle are back in Europe and they arrived in London on June 13th to play 2 nights at the historic Brixton Academy. To give you an idea of how hotly anticipated these shows were, tickets sold out within 4 minutes of going on sale.

The atmosphere ahead of the show is something rarely seen at the venue, there is an electric buzz like when Stone Temple Pilots played here in support of their 2nd album Purple or more recently Prophets of Rage’s show here last year. The feeling inside the 5,000 capacity building is one of I can say I’ve witnessed this band and the elusive genius that is Maynard James Keenan.

Before show time starts a taped announcer the one you’d here in a dystopian movie reminds everyone that no cameras or phones will be allowed, we get two reminders, plus there are signs everywhere in the building ‘no photos, no exceptions’. Everyone has an opinion on this, the right to claim a memory from the night, but looking around the venue and seeing everyone’s attention glued to the stage and no phones shooting a gig and getting into your viewpoint I was left a little stunned. It was as if we were thrown back into the mid 1990’s again and the feeling seemed like there was human connection between the band and the fans.

When the lights dimmed the members of A Perfect Circle took to the stage and then the silhouetted figure of Maynard James Keenan stood at the back on a riser, made his entrance. His own pedestal was fitted with lights and he stood as a towering figure suited and complete with his wig. The last time I had witnessed him with his other band Tool he came on stage in just his underpants.

The band open with ‘Eat The Elephant’ the title track from their latest release and already Keenan and his band have you hooked. Almost covered in complete darkness we get snippets of lights that tease us as the night gets older culminating in a superb Bjork like laser show. And because you’re not looking through a phone there is a sense that you are with the band the whole way. Now you get it and it becomes quite clear why the band want you to be a physical part of the show.

‘Disillusioned’ follows after the opening number and we are introduced to the majestic guitar playing of Billy Howerdel. You are watching a band perform but with A Perfect Circle or let’s face it with any project associated with Keenan you also watch theater too. And it’s not the hokey stuff served up by the likes of Alice Cooper and Marilyn Manson not that’s there’s anything wrong with what they do. But with this type of theater the way it is processed can leave you quite emotional. I witnessed several people with tears in their eyes as the lights changed during ‘The Contrarian’, the stage was seeped into a deep blood red glow which reflected Keenan’s thoughts during the recording of the track. In the middle of the show emotions ran high again when each band member returned to their pedestal and the image on each one appeared of a stem of petals and then we were surprised when Keenan started to sing John Lennon’s ‘Imagine’. At the end the response was overwhelming and goose bumps were running out of supply hearing Keenan’s voice on this track.

‘The Doomed’ was received warmly and is arguably the best track on their latest album and ‘Counting Bodies’ changed the mood of the night once again as a relentless noise engulfed the venue. The band finished up with another surprise a cover of AC/DC’s 1977 classic ‘Dog Eat Dog’. Keenan then paid tributes firstly to Anthony Bourdain and then to Chris Cornell he rose his fist in the air as a tribute and then disappeared into the darkness. But that isn’t the final image that we are treated to, that belongs to guitarist Howerdel who sunk to his knees in appreciation of tonight’s crowd. The lights come back on, the show is over and you start wondering if you should pay over the odds to go through it all again the next day, it doesn’t sound that crazy an idea. Although stencilled outside on the pavements surrounding the venue is an advert for the bands next big gig in the UK which takes place in December at Wembley Arena, between that date the band will embark on a North American tour which if it’s anything like what we have witnessed in London tonight simply cannot be missed.