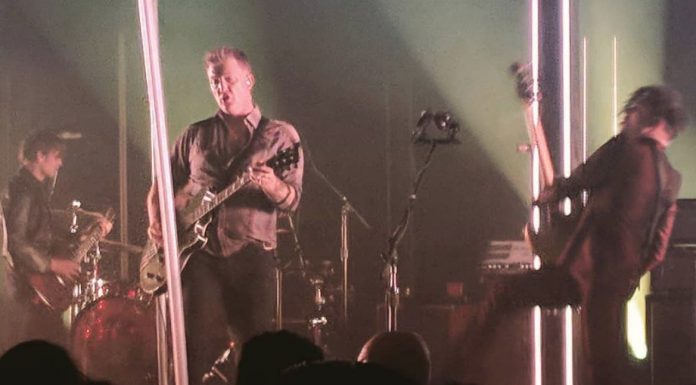 Queens of the Stone Age guitarist Troy Van Leeuwen had a fall at the band’s show in San Diego a couple of days ago during a performance of “Mexicola.” Fortunately, fans are reporting that he appeared to be okay after the scare and continued to play.

Awesome_Charlie posted on Reddit, “Wanted to record a snippet of Mexicola in San Diego tonight and ended up perfectly catching Troy slip lol didn’t even see it till I watched the video.”

“He’s fine, played through Song for the Dead quite masterfully.”

You can watch the video clip below.

Cornwall Live are reporting that Queens of the Stone Age, one of the world’s biggest and best rock bands, have been confirmed for the Eden Sessions and will play a show in front of the biomes in the summer.

The band, who were formed in Palm Desert in California’s Coachella Valley, come to Eden off the back of the release of their acclaimed seventh studio album Villains, which came out last summer.

The record was their first to hit the top of the UK album charts and features the tracks Feet Don’t Fail Me, The Way You Used to Do and The Evil Has Landed.

Villains was produced by Mark Ronson and nominated in the Best Rock Album category at this year’s Grammys.

They play the Eden Sessions on Tuesday, July 3.