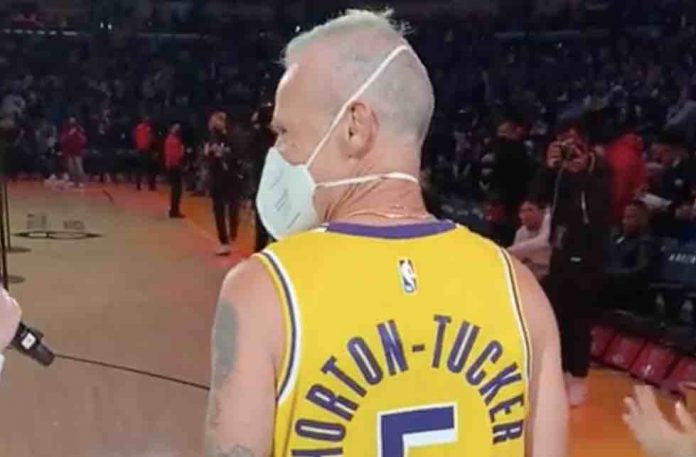 Flea, the founding member of the popular and funky alternative rock band Red Hot Chili Peppers is a huge fanatic of the NBA team, the Los Angeles Lakers and his love for the franchise dates back many years. He also claims himself to be the greatest NBA analyst in his Twitter account. Flea also has a tattoo on his right arm that reads ‘Go Lakers!’. Recently, the Red Hot Chilli Peppers bassist participated in most of Laker’s games and celebrated their victories over the years. Red Hot Chili Peppers’ John Frusciante was also recently spotted drinking.

During the halftime skills challenge of The Lakers’ game against the Memphis Grizzlies, he represented the Lakers. However, he missed out on some shots but made some great plays. Throughout the game, it was evident how much he is fond of the NBA side.

It has become quite a tradition to conduct the annual 3-point contest and skills challenge at halftime of all-star games. This is not the first time Flea participated in a basketball competition as in the ‘90s, he made six consecutive 3-pointers on the court.

This incident occurred during an MTV-hosted celebrity basketball competition dubbed “Rock N’ Jock”, where he posted a photo on Instagram of his turn in the court, accompanied by the caption, “I’m just saying. I made 6 in a row and won that s*it, didn’t even need to shoot the last one. Tell me something good.”

Lakers had a tough time playing the Grizzlies as the former suffered a big time defeat. It was interesting to see their biggest fans following them on the court for that game during halftime. However, the Lakers weren’t able to keep up with Grizzlies, facing a disappointing loss with the scoreline showing 119-127.