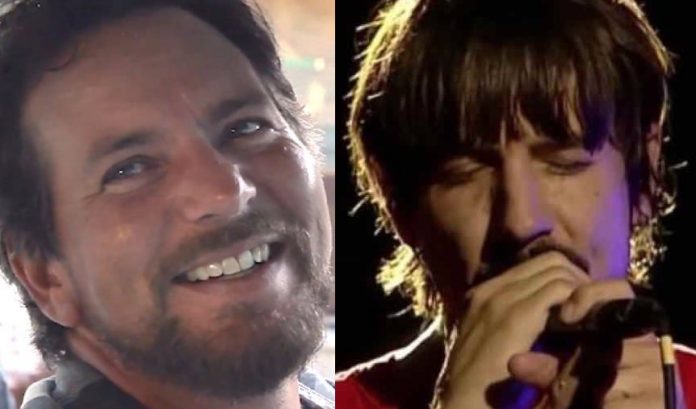 Pearl Jam frontman Eddie Vedder and The Strokes are set to play at the Ohana Festival in Dana Point, CA. The Strokes will play on September 27th, while Vedder will play on September 28th. The September 29th headliner is currently unknown, but there is a rumor on the Ten Club board that it could be the Red Hot Chili Peppers. vedpunk, who has correctly posted tour news before official announcements in the past, posted on Saturday, “Hearing strong rumors from an event sponsor that the Chili Peppers are also playing Ohana. Tickets are going to be impossible.”

Last year Vedder, Beck, Mumford and Sons, Eric Church, Norah Jones, Yeah Yeah Yeahs, Johnny Mars, Young The Giant, and others played at Ohana. Vedder has run the Ohana festival since 2016, so this will be his fourth straight year headlining the show. Vedder has used the Ohana Festival as a platform to debut some of his only new music since Pearl Jam’s Lightning Bolt in 2013. In 2016 he debuted “Out of Sand” a year before it was officially released on the Twin Peaks soundtrack, and in 2017 he debuted a new song tentatively titled “Share The Light” that has yet to be officially released.

Vedder is also set to tour Europe this summer, and will headline the Innings Festival in Arizona on Sunday night.