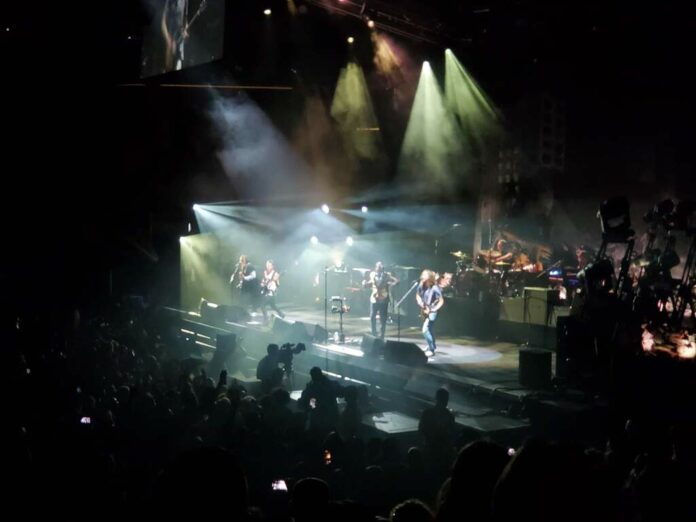 The pandemic affected everyone in one-way or another. One of those ways was the closing down of music venues and cancelling of tours across the board. One such tour to fall prey to the pandemic was the reunion tour of My Chemical Romance. Fast-forward two years and now the tour is finally taking place.

My Chemical Romance has had quite the career and if you are like me and of a certain age growing up in the New Jersey music scene then you could not miss their rise to fame. I can remember going local shows back in the day and seeing flyers for upcoming My Chem shows mixed with the talk of another Jersey band getting a shot at the big time. Twenty years later I got to see them at the Prudential Center in New Jersey on Wednesday, which is mind blowing. It was the beginning of a nostalgia trip.

The Prudential Center in Newark, New Jersey has become one of my favorite large venues over the past few years. Not only because it’s the home of the NHL’s New Jersey Devils but it turns out it is a great sounding music venue. I’m usually not a fan of large concerts because the sound quality can suffer and the chaos of people seems to degrade the experience and create anxiety. Prudential is different though. I swear there isn’t a bad seat in the house and the sound is excellent. Nothing is lost in the mix especially when bands like My Chemical Romance or their direct support band.

Unfortunately we missed the first opening band but I was surprised to see that Midtown was direct support. I can remember buying their first ep so a show years ago and was happy to get a chance to see them again after so many years. They played a good an energetic set with a few of my favorite songs sprinkled in. It brought me back to the good old days when I was just getting into the music scene and joining my first “real” bands. The sounded great and seemed genuinely happy to be back up on stage playing and to such a huge crowd.

Speaking of the crowd, I was happy to see that the venue was pretty full the whole time we were there. People came for the whole show. Not one of the just show up for the headliner situations. Not to mention My Chemical Romance seems to have a true diehard and caring community of fans. It has been a while since I have seen so many people dressed up for the show. Trade mark black shirts and red ties, black parade jackets and even some with face paint. It was also nice to see the plethora of My Chemical Romance t-shirts from over the years as I navigated the
halls to my seat.

Once Midtown was done it was time for the main event. The lights went down and an ominous David Lynchian pulse came of the speakers with simple lights of to the side. This went on for what felt like forever but it did its job building tension and excitement. Then off to the side of the stage there was movement. It was game time. The band came out to a crowed of amped up fans who have been waiting two years for this show and let them know with a cacophony of yells and applause to which the band launched into their brand new song.

The band proceeded to play for an hour mixing songs from their whole discography. It was a nice mix of material for everyone. They played the big hits and a few other favorites covering their twenty-year career. There was a little bit of something for everyone and they executed it flawlessly. Their stage presence was energetic and engaging. Musicianship was on point. Set in front od a backdrop of what looked like a burning city. I couldn’t help but to watch the people around me singing back as loud as they could.

People in different rows turned around to sing parts with a stranger while some fans were just loosing their minds in ecstasy. It was nice to witness after all the pandemic distancing and shutdowns people could have fun and interact. Everyone came together to celebrate the reunion of a great band and to embrace the meaning of music. The music brings people together and that was shown ten fold that night. I was also taken aback by the bands awareness of the crowd and making sure that people on the floor weren’t too crowded or bunched up. Growing up in the music scene I always admired that people helped and took care of each other if someone fell or were being pushed up on a barricade and it was nice to see they still held those ideals.

All in all it was a great experience and one that brought me back to why I love music and why I got into it in the first place. I traveled back in time to when I was navigating the local music scene and felt the same camaraderie that I felt all those years ago. I look forward to any of the new music that My Chemical Romance releases in the future and hope that everyone was as satisfied with the show as I was. It was truly an event and not just another concert.