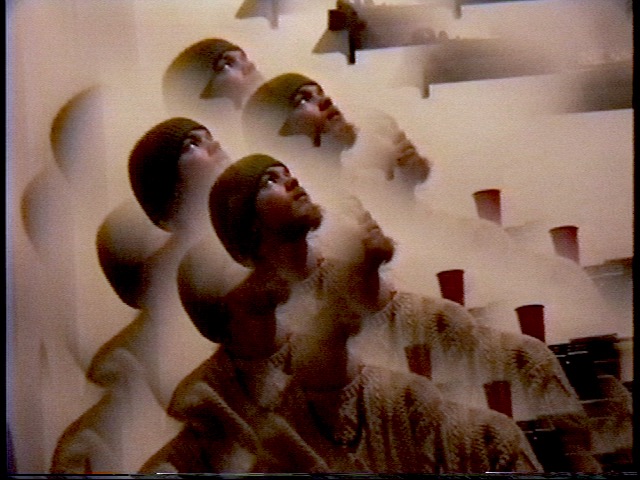 Nowadays, it is common for us to document our everyday lives with the greatest of ease – thanks to iPhones and other convenient devices. Additionally, reality programming is regularly featured all over TV (and also on YouTube, Facebook, Twitter, and Instagram). But from 1990-1995, iPhones were still a long ways off, and reality shows – apart from MTV’s The Real World – were not nearly as prevalent. So we have to give credit to Blind Melon’s late/great singer, Shannon Hoon, for documenting the last five years of his life via a bulky, hand-held video camera – now featured in the documentary, All I Can Say.

First mentioned in the 2001 VH1 Behind the Music special on the band, and of course, explained in the book by little old me a few years later, A Devil on One Shoulder and an Angel on the Other, Shannon made it a point to film his life during this period, and in the process, captured not only Blind Melon’s rapid rise and his sad demise, but also, a time capsule of the oft-turbulent/society-shifting early to mid ‘90s.

For the past several years, Shannon’s friend (and one of the world’s top rock photographers) Danny Clinch has been working with co-directors Taryn Gould and Colleen Hennessy on editing down 200 hours (!) of the singer’s raw footage into a tight hour and forty two minute-long film, which was premiered on April 26th at the Tribeca Film Festival in New York City (with the entire modern-day line-up of Blind Melon in attendance, as well as family members, including Shannon’s daughter, Nico).

Instead of assembling a film with modern day narration inserted, All I Can Say (whose title is from a lyric from the band’s biggest hit, “No Rain”) is comprised solely of Shannon’s filmed material and TV clips from the era. And while it jumps around a bit time-wise, there is a chronological thread running throughout. Also, Shannon timestamped his footage (in the bottom corner of the screen), so you know the exact date each scene was shot.

Two moving scenes open and close the film – Shannon singing the “acapella beginning” of the Blind Melon classic “I Wonder” while sitting on a floor with psychedelic lights flashing on him, and then, footage of a tired-sounding Shannon in his hotel room on the phone, mere hours before he would die from a drug overdose.

What lies in between is a treasure trove of footage for fans of Shannon and the band – including cameos by the likes of Slash, Axl Rose, Lenny Kravitz, and even an “audio appearance” by Neil Young (you’ll just have to see the scene to know what I’m talking about), delivering a pizza totally nude to Axl during a Guns N’ Roses concert, Shannon recording vocals for “No Rain,” and working on a demo of the song “Soup,” among other memorable scenes.

And there are quite a few humorous moments, including guitarist Christopher Thorn teasing Shannon for losing a hard-fought ping-pong game to the group’s other guitarist, Rogers Stevens, as well as a scene in which Stevens is nestled in bed, but is being hounded by Shannon and his camera. Another standout includes Shannon entering a backstage area and leaving his video camera on a counter and briefly leaving the room, while the other members must not have known it was still recording – as they discuss amongst themselves their disappointment that Rolling Stone wanted just their singer for a front cover photo (ultimately, the band got their wish and all five members were featured on the November 11, 1993 issue’s cover).

But as expected, not all of All I Can Say is jolly good fun, as exemplified by Shannon struggling to stay sober (and playing a voicemail message at one point from Pearl Jam’s Mike McCready, who also at the time was in the process of getting sober), touching footage of him playing with his young niece (who refers to him as “Uncle Shannon”), and his brief relationship with his daughter (including planting a tree for her in the backyard of his and his girlfriend’s house, while she looks on), who was only three months old when her father passed.

But you do not necessarily have to be a Shannon/Melon fanatic to be riveted by the film, as you get to experience an honest snapshot of what it was like to be alive and cognizant during this time period – as we get to see such then-current events unfolding as the 1992 Los Angeles riots, Bill Clinton being sworn in as president, Tonya Harding, OJ Simpson, Woodstock ’94, and the deaths of John Candy, Kurt Cobain, and Jerry Garcia.

One thing that diehard fans may find themselves wishing for more of is full-length performance footage, but ultimately, it makes sense that shorter clips of songs were incorporated, to keep the film moving along and to let Shannon’s story continue to unfold. And who knows, maybe full-length performances will be included when All I Can Say gets the DVD treatment (especially great, never before seen footage spotted towards the end of the film, of the band performing in support of their underrated Soup album).

Thanks to Clinch, Gould, and Hennessy, we now have a fascinating glimpse into the tragically short life of one of the most captivating rock singers/performers of the era (and beyond) – Shannon Hoon.

All I Can Say is…see this film!