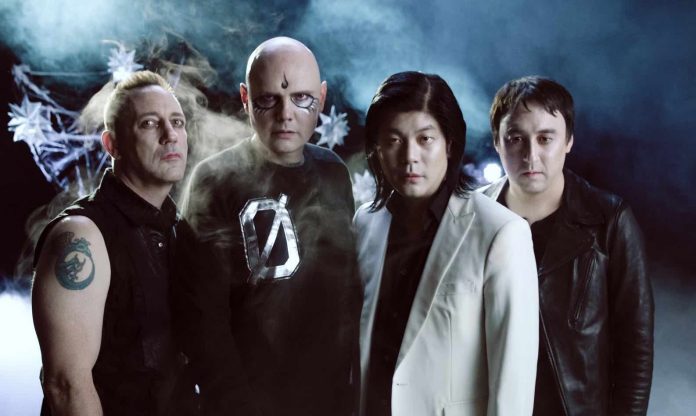 I once read somewhere “the Brian May of the 90s is here and he will rock you” in reference to Smashing Pumpkins’ Billy Corgan as near the outset of his career. I wish I could remember where so I could give credit. Anyway, while it’s no longer the 90s and Corgan is now in the latter stages of his career, that statement is as true now as it was then. He’s still here to rock us, and does so with new vigor on The Smashing Pumpkins’ reunion LP Shiny and Oh So Bright Vol 1/LP No Past, No Future, No Sun.

Like Brian May was later on in his career, Corgan also isn’t interested in further demonstrating his guitar god chops. He’s already established this on every single previous Smashing Pumpkin’s album. Besides, he reminded us all just how much of a prolific guitar player he is with this past summer’s Smashing Pumpkins’ reunion tour. That isn’t to say that he, along with James Iha and Jeff Schroeder, don’t weave some intricate and flat out rocking guitar riffs and arrangements on Shiny and Oh So Bright Vol. 1. It’s to say that these riffs and arrangements comprise the foundations of the song structures instead of serving as the decoration.

That might be considered a bit of a dubious statement after listening to the LP’s first single “Solara.” It’s nothing if not a full out guitar rock song in the vein of every other Smashing Pumpkins full out guitar rock song. Tracks like the powerfully introspective and uplifting “Travels” and rhythm guitar driven “Silvery Sometimes (Ghosts)” recall more unique tracks like “1979” off of Melon Collie and The Infinite Sadness in stead of solo driven tracks like Siamese Dream’s “Soma”. Previous Pumpkin songs that created a wall of atmospheric guitar noise that relied on rhythms rather than riffs are the inspiration here. It’s great to hear Corgan exploring this type of song more fully on Shiny and Oh So Bright Vol 1. Don’t misunderstand me though, both these songs are not rehashes of “1979” in any formulaic way. They are songs that build upon the style and sound of “1979” instead of imitating it in order to attract airplay. “Travels” and “Silvery Sometimes (Ghosts)” push that familiar Pumpkins’ sound into new territory that feels and sounds fresh. “Solara” might be a great headbanger, and rightly so. “Travels,” like its name suggests, takes you somewhere new instead.

Part of Corgan’s appeal as a songwriter is his ability to write a song that lasts for 5 or 6 minutes (or longer), but never feels long winded or overbearing. Well, at least this is true most of the time. “Alienation” is this album’s most long and saga like track. Clocking in at 5 minutes and 1 second, “Alienation” is the “Porcelina” of this LP. It’s structure is more reminiscent of “Bohemian Rhapsody,” although its a completely different sounding track for the most part. Opening with a signature Corgan piano riff and building a steady rhythm that grows to support some inspired lead and rhythm guitar playing (from what is most likely all three guitar maestros in the band) “Alienation” forms the rock solid heart of the LP. It’s amazing that this far into his career, Corgan can still come up with a song that is instantly recognizable as a Smashing Pumpkins’ song, replete with soaring guitar solos, soothing piano sections, and powerful lyrics, and still not sound like he’s explicitly repeating himself. It’s a further testament to his songwriting ability.

At this point, you might be thinking that I’m thinking that Shiny and Oh So Bright Vol 1 is the best thing since “Stairway to Heaven.” It’s not. It might be the best thing since Mellon Collie though. Shiny and Oh So Bright Vol 1 harkens back to Mellon Collie’s brilliant diversities through its inclusion of disparate rock songs that manage to create the dynamic sounds and emotions that Mellon Collie indulged in without resorting to drum machines, heavy production, and programming. Rick Rubin brings out Corgan, Schroeder, Iha, and drummer Jimmy Chamberlin’s unique talents and styles, mixing them in such a way to create a wide ranging sound that utilizes the basics of drum, bass, and guitar (with a little piano, backing chorals, and strings mixed in here and there). “Marchin’ On” is full out rocker in the vein of “Solara,” but is heavier and more punk driven. “Seek and You Shall Destroy” is another rocker, but moves at a totally different pace and, unlike many of the songs on the LP, lives and dies by its thick, and repeated, signature riff. It’s maybe the most uninspired song on the album, but it boasts a signature heavy Corgan riff so it’s still everything you want to hear from this type of Pumpkins’ song.

Rounding out the LP are “Knights of Malta,” the album’s opening track, and “With Sympathy” the album’s second to last track. Both tracks, while solid compositions which many other bands recording right now would love to be able to pull off, are both the LPs weakest tracks. “With Sympathy,” being the stronger of the two, makes for the better listen. It’s chief strength is the somewhat welcome down tempo chill out it provides in contrast to the album’s hard rockers. “Knights of Malta” isn’t a bad song. In fact, it sports a catchy, almost Beatles-esque, sound, as well as some some interesting reverse playback guitar solos. Its ascendant break and backing chorus of female voices are smart additions which flush out the rather rote riffs. The only thing that keeps it from being a stand out track for the Pumpkins is its manipulated playback of Corgan singing “oh oh oh oh oh OOOH!” over and over and over. On an album of great songs that equal a triumphant return for one of the most prolific bands of their era, this one small misstep is forgivable.

Billy Corgan, James Iha, Jimmy Chamberlin, and Jeff Schroeder prove that their reunion is more than just an attempt at a cash grab funded by nostalgic middle aged Gen Xers. It’s the true second coming of Billy Corgan and company. Who knows if Corgan can save rock n roll, let alone his own brand of grunge. Shiny and Oh So Bright Vol. 1 is a damn near miraculous event in and of itself though. It saved The Smashing Pumpkins as an act and relevant recording entity, so rock and grunge just might indeed have a new savior on its hands…again.